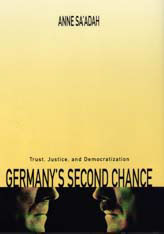 How does a country reconstitute itself as a functioning democracy after a period of dictatorship? The new community may execute, imprison, or temporarily disenfranchise some citizens, but it will be unable to exclude all who supported the fallen regime. Political reconciliation must lay the groundwork for political trust. Democracy offers the compromised—and many who were more than just compromised—a second chance.

In this new book, Anne Sa’adah explores twentieth-century Germany’s second chances. Drawing on evidence from intellectual debates, trials, literary works, controversies about the actions of public figures, and partisan competition, Sa’adah analyzes German responses to the problem of reconciliation after 1945 and again after 1989. She depicts the frustrations, moral and political ambiguities, and disappointments inherent to even successful processes of democratization. She constantly underscores the difficult trade-off between achieving a modicum of justice and securing the legitimacy and stability of the new regime. A strategy of reconciliation emphasizing outward conformity to democratic norms and behavior, she argues, has a greater chance of sustaining a new and fragile democracy than do more direct attempts to punish past misdeeds and alter people’s inner convictions.