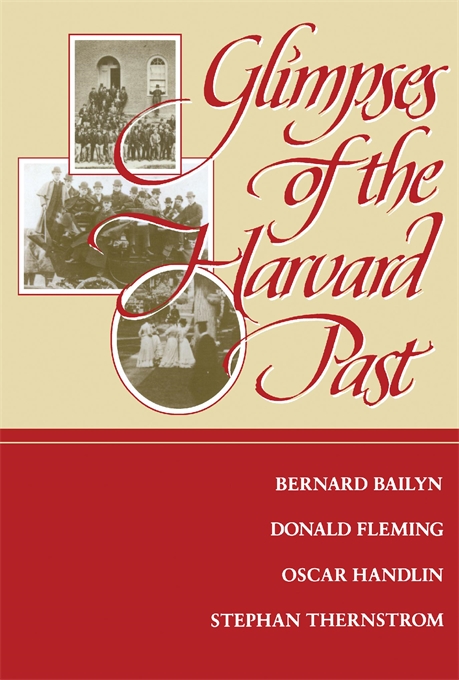 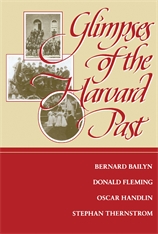 Glimpses of the Harvard Past

This happy combination of literary essay and exceptionally well-written history, providing insights into a past still important in the twentieth century, will quickly take an honored place on the shelves of Harvardiana.

Bernard Bailyn writes on the origins of Harvard and the foundations of Harvard’s persistent character, structure, and style of governance, and contributes another chapter on the unhappy ending to the administration of the beloved President Kirkland, who presided over but could not control a period of profound change. Oscar Handlin describes the shifting relationships and power struggles among faculty, administration, and students over the years (“Making Men of the Boys”) and Harvard’s evolution from an ingrown community of teachers and students into a large, complex institution with worldwide prestige. Donald Fleming has chapters on the presidency of Charles William Eliot (“the greatest man in the history of Harvard”) and the colorful personalities of Harvard (not only “Copey” and Santayana and Charles Eliot Norton, but also “Old Sophy,” who kept a pet chicken in his room in Holworthy). Stephan Thernstrom examines the growing diversity of the student body as to finances, geography, religion, and racial background from the eighteenth century to the 1980s.

The subjects are of continuing interest not only to members of the Harvard community, who will treasure this memento of Harvard’s 350th anniversary, but also to historians of higher education and ordinary readers, who will enjoy the new information, original personalities, and thoughtful perspectives the book offers.