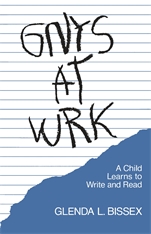 A Child Learns to Write and Read

When he was five and a half years old, Paul Bissex wrote and posted this sign over his workbench: DO NAT DSTRB GNYS AT WRK. The “work” from which this “genius” refused to be “disturbed” was the work typical of all children, namely, the task of learning how to write and read. In Gnys at Wrk, Glenda Bissex goes far beyond the chronicle of her son’s accomplishment to provide the first in-depth case study of a child’s confrontation with written language, rich in revelations about the nature and processes of the mind.

Paul begins by writing notes in a system of his own invention—like IEAVGAWNTOOTHESTOR for “I have gone to the store”—and this system becomes more elaborate as he goes on to create stories, games and signs. Eventually, the system merges with conventional written English as Paul learns to separate words and to associate letters not with their names but with sets of possible sounds.

Glenda Bissex shows how the evolution of Paul’s writing ability is closely intertwined with his reading development—in Paul’s own words, “once you can write a word you can read it.“ She also makes an intriguing comparison between Paul’s schoolwork and his endeavors at home, and explores the influence of his personal interests and world view on his facility with words. Her study is a unique, detailed account of the “genius” that is, quite simply, the human capacity for language.