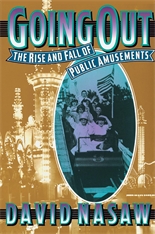 The Rise and Fall of Public Amusements

The new amusement centers welcomed women, men, and children, native-born and immigrant, rich, poor and middling. Only African Americans were excluded or segregated in the audience, though they were overrepresented in parodic form on stage. This stigmatization of the African American, Nasaw argues, was the glue that cemented an otherwise disparate audience, muting social distinctions among “whites,” and creating a common national culture.