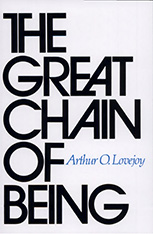 The Great Chain of Being

A Study of the History of an Idea

“A fascinating and moving book… Everyone interested in the larger ironies of human history should read [it].”—Ernest Nagel, The New Republic

“The Great Chain of Being, employed as a title, would have suggested…what was ‘probably the most widely familiar conception of the general scheme of things’—the idea of a world in which every being was related to every other in a continuously graded scale, with no possible form of diversity missing. Pursuing the biography of this idea through more than two thousand years, the distinguished author of these lectures makes clear its amazing influence on the thought and history of the Western World… Intellectual vigor, critical precision and an amazing knowledge of what mankind has thought and desired in other ages distinguishes this book. No student of the history of literature, science, or philosophy may well neglect it.”—Clifford Barrett, The New York Times Book Review

“One of the great books of our generation.”—Marjorie Nicolson, American Scholar

“Men are galvanized by ideas and act as vehicles for them… Such a ruling idea is that of the great chain of being. Prof. Lovejoy’s study records the birth, the growth, the vicissitudes, transformations, and finally the senility, and perhaps the death of this idea. The study is as fascinating as that of the rise and decay of an empire, and, in fact, it is the study of the empire of an idea over human minds throughout many centuries… Prof. Lovejoy’s approach is fresh and different… The learning exhibited in this book is vast.”—Raphael Demos, Modern Language Notes