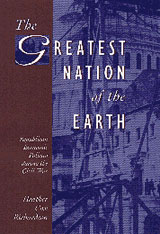 The Greatest Nation of the Earth

While fighting a war for the Union, the Republican party attempted to construct the world’s most powerful and most socially advanced nation. Rejecting the common assumption that wartime domestic legislation was a series of piecemeal reactions to wartime necessities, Heather Cox Richardson argues that party members systematically engineered pathbreaking laws to promote their distinctive theory of political economy.

Republicans were a dynamic, progressive party, the author shows, that championed a specific type of economic growth. They floated billions of dollars in bonds, developed a national currency and banking system, imposed income taxes and high tariffs, passed homestead legislation, launched the Union Pacific railroad, and eventually called for the end of slavery. Their aim was to encourage the economic success of individual Americans and to create a millennium for American farmers, laborers, and small capitalists.

However, Richardson demonstrates, while Republicans were trying to construct a nation of prosperous individuals, they were laying the foundation for rapid industrial expansion, corporate corruption, and popular protest. They created a newly active national government that they determined to use only to promote unregulated economic development. Unwittingly, they ushered in the Gilded Age.