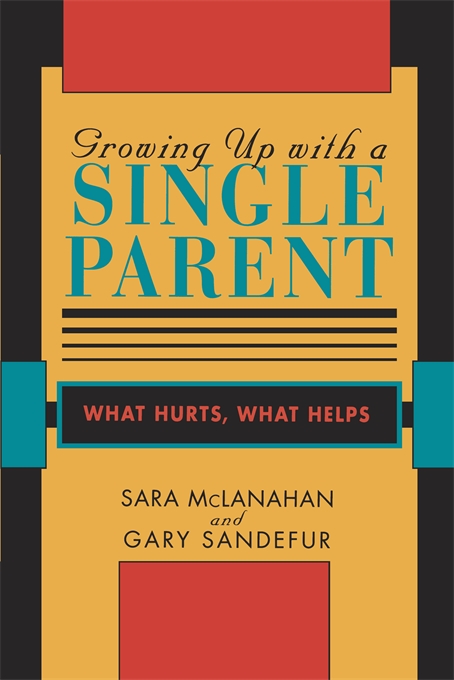 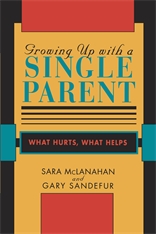 Growing Up With a Single Parent

What Hurts, What Helps

“Based on careful analysis of data from various national surveys...[this book is] the first systematic attempt to disentangle the effects of poverty from family breakdown across a range of problems afflicting children...By using sophisticated statistical techniques to control for such background characteristics as income and race, McLanahan and Sandefur show that, although growing up poor is very damaging to children, single parenthood is in itself severely injurious...The very richness of its analysis makes the book a powerful tool for social policy.”—Douglas J. Besharov, Washington Post

“[This book] posits a view embedded in the authors’ stated belief that ’children who grow up in two-parent families will do better, on average, than children who grow up with only one parent’...The strongest aspect of this book is the excellent job the authors do of sorting through theories and existing data in an attempt to explain why additional research is needed on single parenthood. Unlike some other earlier research accounts of the effect of family structure on child well-being, McLanahan and Sandefur clearly document the role of income, parenting styles, and the contribution of non-resident fathers as well as stepfathers to the child’s social capital as explanations for children in one-parent families doing less well than children in two-parent families. The reader is not left wondering exactly how or why the authors take the position they present...Scholarly, thoughtful...[this book] includes information that is both important and timely given the welfare reform debate at the state and local level.”—Edwin P. Gordon, Social Policy

“This book is a must read for concerned parents and policymakers. It reaffirms what the National Commission on Children said: the best way to help our children is to strengthen families. In addition to presenting compelling evidence about the challenges single parents and their children face, the authors include solid recommendations on ways to truly help children.”—Senator Jay Rockefeller

“The concluding chapter of this short, clearly written book suggests sensible policy directions for the support of single-parent families by noncustodial parents, governments, and communities. A strength of this book is the clarity of the analysis...Highly recommended.”—Choice

“[This] is essentially a text which reports the findings of the authors’ analyses of American survey data on the achievements of children from ’disrupted’ families. As such it will be primarily of interest to researchers. Nevertheless, it is written in a style which undergraduate students will find very accessible. Moreover, data presentation is refreshingly clear; effective bar charts and simple tables appear in the main text, whilst more complex data displays are located in an appendix, along with a description of methodology.”—Jane Pilcher, Reviewing Sociology

“Other authors have shown that a child growing up with a single parent suffers disadvantage at school. McLanahan and Sandefur, in this careful empirical analysis, demonstrate how this disadvantage occurs, particularly emphasizing the role of income and social capital. Moreover, they show what can be done about it--both by parents and by government. This book is a recipe for action.”—James S. Coleman, University of Chicago

“Sara McLanahan and Gary Sandefur are addressing the single most important issue in American life: the effect of a family breakdown on children’s well-being. Growing Up with a Single Parent puts the debate on an entirely new plane.”—Justice Richard Neely, Supreme Court of Appeals, West Virginia

“This book is by far the most comprehensive, balanced investigation of the effects of growing up in a single-parent family available today. It is certain to be a crucial resource in the continuing debates about the consequences of family change for children’s well-being.”—Andrew Cherlin, Johns Hopkins University