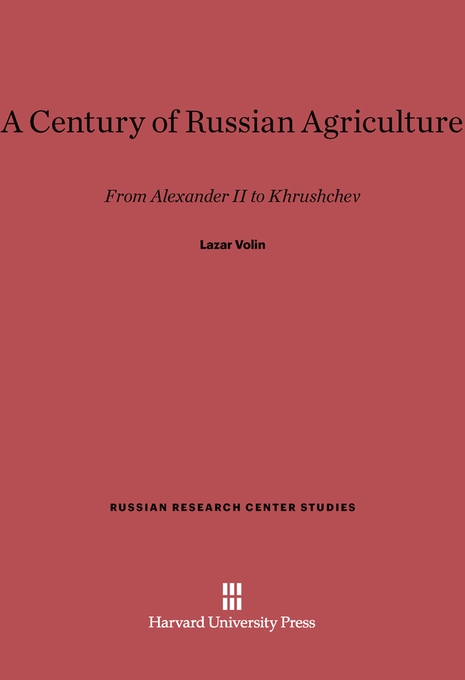 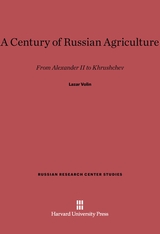 A Century of Russian Agriculture

From Alexander II to Khruschev

“The failure of the annual harvest is still an event of greater importance in the lives of the Russian people than…what happens to steel production.”—from the Introduction

With over 540 million acres sown to crops the Soviet Union was one of the world’s agricultural giants. Yet agriculture was the Achilles heel of the Soviet economy. Public pronouncements of Russian leaders—prerevolutionary and postrevolutionary alike—attested the crucial role of the agricultural problem, its economically and politically explosive nature, and its persistence over the years.

This is one of the most thorough studies ever made of Russian agriculture. Emphasizing the continuity of problems and policies too often dichotomized into tsarist and Soviet eras, Lazar Volin has created a monumental work—a sweeping panorama of the century between the emancipation of the serfs and the 1960s.

The author begins by recounting the development of serfdom and describing the emancipation and subsequent problem of land distribution. In the first part of the book he also explores the first agrarian revolution (1905) and the reforms that followed it, as well as the conditions during World War I that led to the Revolution of 1917. In Part II he treats agricultural conditions during the Civil War, attempts made to restore the economy by means of the New Economic Policy, Stalin’s program of forced collectivization and liquidation of the kulaks, agricultural conditions during World War II—including Nazi policies in occupied territory—and the policies of Stalin in the postwar recovery. The longest section of the book is devoted to the Khrushchev era. It covers capital investment and expansion of sown acreage, incentives for the kolkhozniks, their income, and the supply of consumer goods, as well as mechanization and electrification programs, the state farms, rates of production, and administrative control and planning. The final chapter summarizes the past century and comments on the outlook for the future.