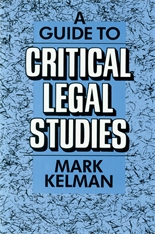 A Guide to Critical Legal Studies

A good deal of the writing in critical legal studies has been devoted to laying bare the contradictions in liberal thought. There have been attacks and counterattacks on the liberal position and on the more conservative law and economics position. Now Mark Kelman demonstrates that any critique of law and economics is inextricably tied to a broader critique of liberalism.

There are three central contradictions in liberal thought: between a commitment to mechanically applicable rules and to standards that fluctuate with situations; between intrinsic individual values and the objective knowledge of ethical truths; and between free will and determinism. Kelman shows us the pervasiveness of these contradictions in legal doctrine; their connection to broader political theory and to visions of human nature; and, finally, the degree to which mainstream thought tends to privilege certain of these commitments over others.

The author also analyzes two of the most significant components of jurisprudence today the law and economics discipline and the legal process school. He concludes with a lively discussion of the role of law generally and of “cognitive legitimation,” or the ways in which legal thought can make the unnecessary, the contingent, and the unjust seem natural, inevitable, and fair.