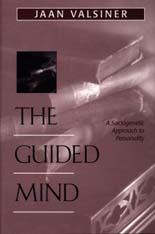 A Sociogenetic Approach to Personality

How is something as broad and complex as a personality organized? What makes up a satisfactory theory of personality? In this ambitious book, Jaan Valsiner argues for a theoretical integration of two long-standing approaches: the individualistic tradition of personalistic psychology, typified by the work of William Stern and Gordon Allport, and the semiotic tradition of cultural-historical psychology, typified by the work of L. S. Vygotsky. The two are brought together in Valsiner’s theory, which highlights the sign-constructing and sign-using nature of all distinctively human psychological processes.

Arguing that the individualistic and the cultural traditions differ largely in emphasis, Valsiner unites them by focusing on the intricate relations between personality and its social context, and their interplay in personality development. The semiotic devices internalized from the social environment shape an individual’s development, and the flow of thinking, feeling, and acting. Valsiner uses this theoretical approach to illuminate two remarkable, and remarkably different, phenomena: letters from the mother of Allport’s college roommate, a key empirical case in Allport’s theory, and the ritual movements of a Hindu temple dancer. Valsiner shows how both exemplify basic human tendencies for the cultural construction of life courses.

The Guided Mind shows the fundamental unities in the vastly diverse phenomenon of human personality.