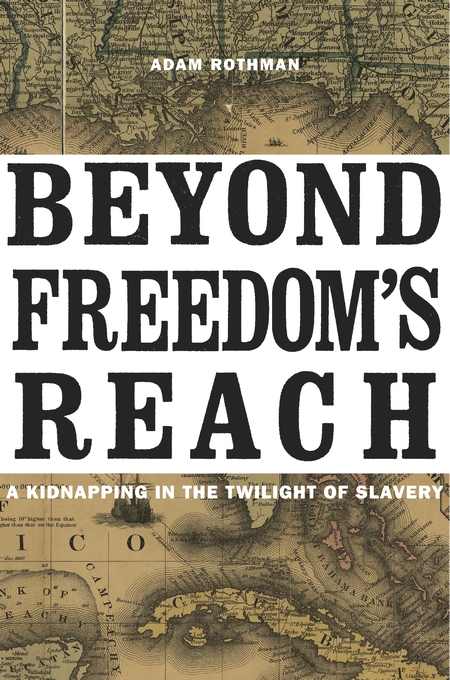 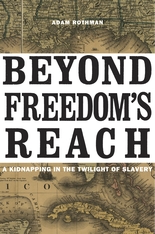 A Kidnapping in the Twilight of Slavery

“[A] riveting narrative… Rothman’s theme is the moral logic of slavery as embedded in law and social custom.”—Jason Berry, The Daily Beast

“The book’s major novelty is its focus on individual personal suffering as opposed to a typical slavery history which is concerned with the quantity of suffering… The informal and engaging tone succeeds in lending Beyond Freedom’s Reach an accessibility to introduce non-specialists to the field of study, whilst aptly adding a human touch to an emotional subject.”—Michael Warren, LSE Review of Books

“Rothman’s narrative is punctuated by expert analysis, and as such is a useful work for students, scholars, and a general public alike. It is particularly valuable as a book that seeks to shed light on kidnapping, a difficult phenomenon for historians to study given that its scope (in any era) is never accurately reflected in the records. For this reason alone, one could call Rothman’s study masterful, because he demonstrates how historians can bring a variety of research techniques to bear on an elusive topic. It stands as a model for how we might reconstruct the subaltern history of kidnapping and connect it with the world of military might and political intrigue within the legal thicket inhabited by both kidnappers and their victims.”—H. Robert Baker, American Nineteenth Century History

“Adam Rothman has contributed a gem to our understanding of the end of slavery.”—Minoa Uffleman, Arkansas Review

“Meticulously researched, well-written and thoughtfully argued, this work should attract not only students of African-American history; those who study southern and Civil War history will enhance their knowledge of 1850–1860s Deep South culture.”—Carol Wilson, Civil War Book Review

“Besides being a truly engaging story, Rothman’s work is a model of how the historian sleuth can imaginatively explore large issues by following clues and tracing leads at the personal and local level, cues often unseen at first glance.”—Joyce Broussard, Civil War History

“In this gem of social history, Rothman recovers the lives of Rose Herera and her family.”—Alfred L. Brophy, The Historian

“This is microhistory at its best.”—Lawrence N. Powell, Journal of American History

“Ideally suited to the undergraduate classroom.”—Richard Bell, Journal of the Civil War Era

“I have said before that we are in a renaissance of excellent historical writing for a general public that wants to read something more than hagiographic narratives. Add Adam Rothman’s Beyond Freedom’s Reach to the list. Rothman tells the story of Rose Herera, a New Orleans slave whose children were spirited away to Cuba by her master during the Civil War. Centering kidnapping in the slave experience, Rothman takes what could be a fairly slender story based upon a relative paucity of evidence to build a tale of great bravery and persistence within a rapidly changing world where African-Americans had relatively little power even in the immediate aftermath of the war.”—Erik Loomis, Lawyers, Guns, and Money

“Amidst slavery’s unraveling in New Orleans, Rose Herera fought to prevent her owner from taking her children to Havana, ‘beyond freedom’s reach.’ Rothman’s recovery of Herera’s remarkable story, her incarceration and journey through the legal system to rescue her children, marks an important contribution to the history of emancipation and the contingency of wartime freedom.”—Thavolia Glymph, author of Out of the House of Bondage: The Transformation of the Plantation Household

“The extraordinary odyssey of Rose Herera to recover her kidnapped children from slavery illuminates the impact of the Civil War on the enslavers and the enslaved and reminds us of the precariousness of freedom during the Reconstruction era. An impressive and compelling history.”—Randy J. Sparks, author of Where the Negroes Are Masters: An African Port in the Era of the Slave Trade