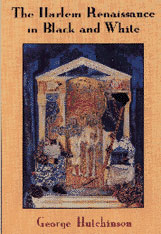 The Harlem Renaissance in Black and White

It wasn’t all black or white. It wasn’t a vogue. It wasn’t a failure. By restoring interracial dimensions left out of accounts of the Harlem Renaissance—or blamed for corrupting it—George Hutchinson transforms our understanding of black (and white) literary modernism, interracial literary relations, and twentieth-century cultural nationalism in the United States.

What has been missing from literary histories of the time is a broader sense of the intellectual context of the Harlem Renaissance, and Hutchinson supplies that here: Boas’s anthropology, Park’s sociology, various strands of pragmatism and cultural nationalism—ideas that shaped the New Negro movement and the literary field, where the movement flourished. Hutchinson tracks the resulting transformation of literary institutions and organizations in the 1920s, offering a detailed account of the journals and presses, black and white, that published the work of the “New Negroes.” This cultural excavation discredits bedrock assumptions about the motives of white interest in the renaissance, and about black relationships to white intellectuals of the period. It also allows a more careful investigation than ever before of the tensions among black intellectuals of the 1920s. Hutchinson’s analysis shows that the general expansion of literature and the vogue of writing cannot be divorced from the explosion of black literature often attributed to the vogue of the New Negro—any more than the growing sense of “Negro” national consciousness can be divorced from expanding articulations and permutations of American nationality. The book concludes with the first full-scale interpretation of the landmark anthology The New Negro.

A courageous work that exposes the oversimplifications and misrepresentations of popular readings of the Harlem Renaissance, this book reveals the truly composite nature of American literary culture.