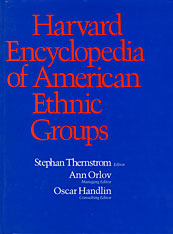 From Acadians to Zoroastrians-Asians, American Indians, East Indians, West Indians, Europeans, Latin Americans, Afro-Americans, and Mexican Americans—the Harvard Encyclopedia of American Ethnic Groups provides the first comprehensive and systematic review of the many peoples of this country. It should excite all Americans about their nation.

Informative and entertaining, this volume is an indispensable reference work for home, library and office. It establishes a foundation for the burgeoning field of ethnic studies; it will satisfy and stimulate the popular interest in ancestry and heritage. It is a guide to the history, culture, and distinctive characteristics of the more than 100 ethnic groups who live in the United States.

Each ethnic group is described in detail. The origins, history and present situation of the familiar as well as the virtually unknown are presented succinctly and objectively. Not only the immigrants and refugees who came voluntarily but also those already in the New World when the first Europeans arrived, those whose ancestors came involuntarily as slaves, and those who became part of the American population as a result of conquest or purchase and subsequent annexation figure in these pages. The English and the Estonians, the Germans and the Gypsies, the Swedes and the Serbs are interestingly juxtaposed. Even entries about relatively well-known groups offer new material and fresh interpretations. The articles on less well-known groups are the product of intensive research in primary sources; many provide the first scholarly discussion to appear in English. One hundred and twenty American and European contributors have been involved in this effort, writing either on individual groups or on broad themes relating to many.

The group entries are at the heart of the book, but it contains, in addition, a series of thematic essays that illuminate the key facets of ethnicity. Some of these are comparative; some philosophical; some historical; others focus on current policy issues or relate ethnicity to major subjects such as education, religion, and literature. American identity and Americanization, immigration policy and experience, and prejudice and discrimination in U.S. history are discussed at length. Several essays probe the complex interplay between assimilation and pluralism—perhaps the central theme in American history—and the complications of race and religion.

Numerous cross-references and brief identifications will aid the reader with unfamiliar terms and alternative group names. Eighty-seven maps, especially commissioned, show where different groups have originated. Annotated bibliographies contain suggestions for further reading and research. Appendix I, on methods of estimating the size of groups, leads the reader through a maze of conflicting statistics. Appendix II reproduces, in facsimile, hard-to-locate census and immigration materials, beginning with the first published report on the nativities of the population in 1850.