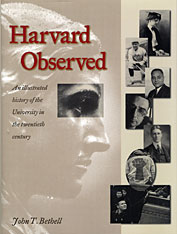 An Illustrated History of the University in the Twentieth Century

In the early years of the twentieth century, President Charles William Eliot fought to keep Harvard from becoming a refuge for “the stupid sons of the rich.” A. Lawrence Lowell, a tireless builder, gave the modern University its physical structure. James Conant helped forge a wartime alliance of universities, industry, and government that sustained an astonishingly prosperous postwar epoch.

Their successors saw Harvard through the turbulent 1960s and 1970s, adapting the University’s programs and policies to the needs of a rapidly changing society, strengthening longstanding bonds with international institutions, and creating new ties to the cultures of Japan, China, and other Eastern nations.

In words and pictures, Harvard Observed documents the shaping of the singular institution that poet and essayist David McCord, a former Harvard Alumni Bulletin editor, called “the haven of scholars and teachers, the laboratory of scientists and technicians, the church of the theologian, the crow’s nest of the visionary, the courtroom of the law, the forum of the public servant. It is gallery, concert hall, and stage; the out-patient ward for the medical student, counting-house of the businessman, classroom of the nation, lecture platform for the visitor, library to the world; and…‘on of the great achievements of American democracy.’”

Depicting the evolution of twentieth-century Harvard in the broader context of national and world events, Harvard Observed has much to say and show about the academic rites, intellectual arguments, sexual mores, fads, and folklore that became touchstones for successive generations of Harvardians. Photographs, drawings, and paintings from the University’s vast archival collections and museums add a compelling visual dimension.