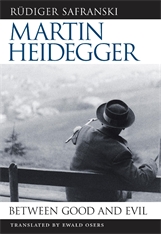 Between Good and Evil

“Rüdiger Safranski’s evenhanded study, Martin Heidegger: Between Good and Evil, is equally successful at illustrating its subject’s pettiness and at displaying the vast power of his imagination. It is the first comprehensive biography of the man, and supersedes both Victor Farías’s Heidegger and Nazism and Hugo Ott’s Martin Heidegger: A Political Life. It reports many facts that these books did not, and it offers a detailed account of Heidegger’s intellectual development—relating his twists and turns, with great skill and remarkable concision, to German intellectual and political life in the first half of this century.”—Richard Rorty, The New York Times Book Review

“A superb work of synthesis, the book places Heidegger’s thought and life in the volatile context of 20th-century German and European politics and philosophy… Although Safranski sees Heidegger as a towering figure in 20th-century philosophy, this is a ‘warts and all’ biography. The author leaves no doubt about Heidegger’s self-centeredness, his intellectual arrogance, and his convenient lapses of memory about his role in the Nazi years. But the book’s primary merit is a superb explication of Heidegger’s thought, its antecedents, and its place in the context of his political and philosophical times. For an English-speaking audience, Safranski’s treatment is easily the best introduction to Heidegger’s complex philosophy… This [is] an important book, highly recommended for anyone interested in the history of 20th-century Continental philosophy and Martin Heidegger’s place in it.”—Dietrich Orlow, The Boston Sunday Globe

“This biography of Martin Heidegger is an impressive achievement, and English-speaking readers are fortunate that it is now available to them… Martin Heidegger is the first comprehensive biography of one of the most influential philosophers of the twentieth century. It offers a detailed view of Heidegger’s intellectual development provided by no previous book, and it gives new information on his involvement with the Nazis. Given the importance of Heidegger’s thought for many celebrated left-wing thinkers, including Jacques Derrida and Michel Foucault, Safranski’s careful consideration of the relation between Heidegger’s right-wing politics and his thought can help readers struggle with the much-debated question of whether the contemporary leftists of the postmodern movement are really cultural reactionaries in disguise… Safranski’s biography is both the most authoritative and the most approachable of the recent Heidegger books.”—Carl L. Bankston III, Magill’s Literary Annual