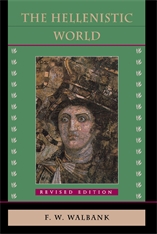 “Walbank’s erudition is predictably wide as well as deep, his mastery of the essential documents assured… He is also commendably up-to-date on many vexed questions of interpretation… Walbank is clear and perceptive.”—Peter Green, The Times Literary Supplement

“Anyone with an interest in classical civilization would enjoy this… It is the best book [on the subject] available in English.”—Robin Lane Fox, Financial Times

“Walbank’s Hellenistic World beautifully recalls for contemporary readers the general and special achievements and features of one of the most remarkable periods in world history.”—John E. Rexine, History

“A concise but comprehensive and authoritative book in English on the Hellenistic world, the world set in motion by Alexander the Great, is indeed most welcome. Walbank was unquestionably well equipped to undertake such a project, and his contribution has been well appreciated.”—Edmund F. Bloedow, Bryn Mawr Classical Review

“Together these five compact volumes [Early Greece by Oswyn Murray, Democracy and Classical Greece by J. K. Davies, The Hellenistic World by F. W. Walbank, The Roman Republic by Michael Crawford, and The Roman Empire by Colin Wells, in addition to the newly published The Later Roman Empire by Averil Cameron] cover much of the history of the classical world, and do so with both ease and authority… For this new series they have been revised or otherwise brought up to date.”—The Washington Post Book World