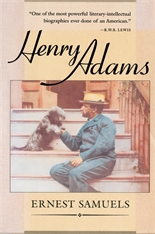 Henry Adams sought, late in life, to thwart prospective biographers by writing his own biography. Published soon after his death in 1918, The Education of Henry Adams was rightly greeted as a masterpiece. Not until thirty years later, with the appearance of the first volume of Ernest Samuels’s biography, did it become apparent how much the story had been colored by Adams’s singular philosophy of history and how great was the disparity between the protagonist of the Education and Adams as he actually was. Upon its completion in 1964, Samuels’s life of Henry Adams was hailed as “one of the great biographical achievements of our time”; its laurels included a Pulitzer Prize.

Ernest Samuels has now distilled his ample narrative into a single absorbing volume. We see Adams as a lively undergraduate, in contrast to the jaded young man of the Education; as budding writer, newspaper correspondent, eager participant in political maneuverings in Washington and at the American embassy in London; as teacher at Harvard and editor of the North American Review; settled in Washington, as scholar, biographer, historian, novelist; as insatiable traveler; as friend and adviser to statesmen; as elderly cosmopolite spending half of each year abroad; and always as witty chronicler of the social scene and trenchant commentator on the events of his time. We are drawn into the personal drama of Adams’s middle years: his married life with Clover; the halcyon period in Washington in the early 1880s, catastrophically terminated by Clover’s depression and suicide; his growing passion for Elizabeth Cameron; and his flight to the South Seas. Throughout the book we follow the genesis and progress of his writings, from his muck-raking journalism in President Grant’s Washington, through the social and political criticism of his novels, his biographies, and his great History, to the classic Mont Saint Michel and Chartres, the daring theories of the Education, and his last essays.

Few biographies have so broad a canvas—sixty years of American political, social, and intellectual life, from the pre–Civil War years to the First World War. And few offer so revealing a portrait of a complex human being and an extraordinary career.