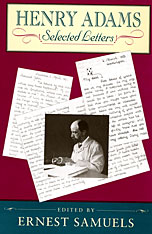 Henry Adams has been called an indispensable figure in American thought. Although he famously “took his own life” in the autobiographical Education of Henry Adams, his letters—more intimate and unbuttoned, though hardly unselfconscious—are themselves indispensable for an understanding of the man and his times.

This selection, the first based on the authoritative 6-volume Letters, represents every major private and public event in Adams’s life from 1858 to 1918 and confirms his reputation as one of the greatest letter writers of his time. Adams knew everyone who was anyone and went almost everywhere, and—true to the Adams family tradition—recorded it all. These letters to an array of correspondents from American presidents to Henry James to 5-year-old honorary nieces reveal Adams’s passion for politics and disdain for politicians, his snobbish delight in society and sincere affection for friends, his pose of dilettantism and his serious ambitions as writer and historian, his devastation at his wife’s suicide and his acquiescence in the role of Elizabeth Cameron’s “tame cat,” his wicked humor at others’ expense and his own reflexive self-depreciation.

This volume allows the reader to experience 19th-century America through the eyes of an observer on whom very little was lost, and to make the acquaintance of one of the more interesting personalities in American letters. As Ernest Samuels says in his introduction, “The letters lift the veil of old-age disenchantment that obscures the Education and exhibit Adams as perhaps the most brilliant letter writer of his time. What most engages one in the long course of his correspondence is the tireless range of his intellectual curiosity, his passionate effort to understand the politics, the science, and the human society of the world as it changed around him… It is as literature of a high order that his letters can finally be read.”