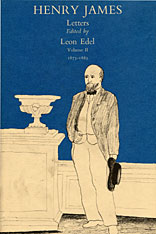 In this, the second volume of Leon Edel’s superb edition of the letters, we see Henry James in his thirties, pursuing his writing in Paris and London and finding his first literary successes in Daisy Miller and The Portrait of a Lady. The letters of these years, describing for family and friends in Boston the expatriate’s days, reveal the usual wit and sophistication, but there is a new tone: James is relentlessly building a personal career and begins to see himself as a professional writer. Few other letters so fully document the process of an artist in the making.

James was a social success in London: in Mr. Edel’s words, “England speedily opened its arms to him, as it does to anyone who is at ease with the world.” The letters of this period pull us into the atmosphere of Victorian England, its drawing rooms, manors, and clubs, and James’s keen American eyes give us views of this world probably unique in our literary annals. He used these observations to forge his great international theme, the confrontation of the Old and New Worlds.