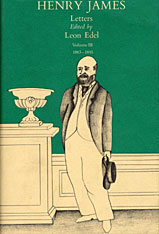 The third volume of Leon Edel’s superb edition of Henry James’s letters finds the novelist settled in Europe and his expatriation complete. The letters of this time reflect the growth of James’s literary and personal friendships and introduce the reader to the frescoed palazzos, Palladian villas, and great estates of the Roseberys, the Rothschilds, the Bostonian-Venetian Curtises, and the Florentine-American Boott circle. In all his travels, James closely observes the social scene and the dilemmas of the human beings within it. During this fruitful period he writes The Bostonians, The Princess Casamassima, The Tragic Muse, and some thirty-five of his finest international tales.

Undermining his success, however, are a devastating series of disappointments. Financial insecurity, an almost paraniod defensiveness following the utter failure of his dramatic efforts, and the deaths of his sister, his friend Robert Louis Stevenson, and his ardent admirer Constance Fenimore Woolson all combine to take him to what he recognizes is the edge of an abyss of personal tragedy.

And yet James endures, and throughtout these trials his letters reveal the flourish, the tongue-in-cheek humor, and the social insight that marked his genius. As Edel writes in his Introduction: “The grand style is there, the amusement at the vanities of this world, the insistence that the great ones of the earth lack the imagination he is called upon to supply, and then his boundless affection and empathy for those who have shown him warmth and feeling.”

In an appendix Mr. Edel presents four remarkable unpublished letters from Miss Woolson to James. These throw light on their ambiguous relationship and on James’s feelings of guilt and shock after her suicide in Venice.