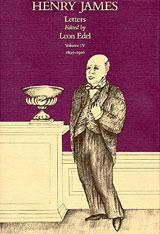 This volume, the conclusion of Leon Edel’s splendid edition, rounds off a half century of work on Henry James by the noted biographer-critic. In the letters of the novelist’s last twenty years a new James is revealed. Edel’s generous selection shows us, as he says, a “looser, less formal, less distant” personality, a man writing with greater candor and with more emotional freedom, who “has at last opened himself up to the physical things of life.”

The decade embracing the turn of the century is the most productive period of James’s career. Happily settled in an English country house and now dictating to a typist, he is able to write The Ambassadors, The Wings of the Dove, and The Golden Bowl in three years. The letters show clearly how his fiction turned from his world-famous tales of international society to the life of passion in his last novels.

His new friends and correspondents include Conrad, H. G. Wells, Stephen Crane, Edith Wharton, and several young men to whom he writes curious, half-inhibited love letters. Mrs. Wharton, with her chauffered “chariot of fire,” introduces him to the thrill of motoring and welcomes him into her cosmopolitan circle; to him she embodies the affluence and driving energy of the America of the Gilded Age. For the first time in over twenty years he revisits his homeland, traveling not only in the East but through the South to Florida and west to California. He is dismayed by the materialism he finds and the changed ways of life. Back in England, he plunges into several projects; for the New York edition of his works he revises the early novels and writes his famous prefaces. His relations with agents and publishers as well as family and friends are fully documented in the letters, as are his trips to the Continent and visits with Edith Wharton in Paris.

His last years are darkened by a long siege of nervous ill health and by the death of his beloved brother William. But he carries on, moves back to London, and continues to work. Among the most eloquent of all his letters are those describing his anguished reaction to the Great War. To show his allegiance to the Allied cause, he becomes a British citizen, six months before his death. The volume concludes with his “final and fading words” dictated on his deathbed.