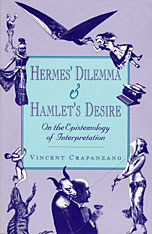 On the Epistemology of Interpretation

A distinguished anthropologist and a creative force behind postmodern writing in his field, Vincent Crapanzano here focuses his considerable critical powers upon his own culture. In essays that question how the human sciences, particularly anthropology and psychoanalysis, articulate their fields of study, Crapanzano addresses nothing less than the enormous problem of defining the self in both its individual and collective projections.

Treating subjects as diverse as Roman carnivals and Balinese cockfights, circumcision, dreaming, and spirit possession in Morocco, transference in psychoanalysis, self-characterization in teenage girls’ gossip, Alice in Wonderland, and Jane Austen’s Emma, dialogue models in hermeneutics, and semantic vertigo in Hamlet’s Elsinore, these essays look critically at the inner workings of interpretation in human sciences and literary study. In modern Western culture’s attempts to interpret and communicate the nature of other cultures, Crapanzano finds a crippling crisis in representation. He shows how the quest for knowledge of “exotic” and “primitive” people is often confused with an unexamined need for self-definition, and he sets forth the resulting interpretive paradoxes, particularly the suppression of any awareness of the play of power and desire in such an approach. What is missing from contemporary theories of interpretation is, in Crapanzano’s account, a crucial understanding of the role context plays in any act of communication or its representation—in interpretation itself.