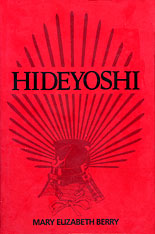 Here is the first full-length biography in English of the most important political figure in premodern Japan.

Hideyoshi—peasant turned general, military genius, and imperial regent of Japan—is the subject of an immense legendary literature. He is best known for the conquest of Japan’s sixteenth-century warlords and the invasion of Korea. He is known, too, as an extravagant showman who rebuilt cities, erected a colossal statue of the Buddha, and entertained thousands of guests at tea parties. But his lasting contribution is as governor whose policies shaped the course of Japanese politics for almost three hundred years.

In Japan’s first experiment with federal rule, Hideyoshi successfully unified two hundred local domains under a central authority. Mary Elizabeth Berry explores the motives and forms of this new federalism which would survive in Japan until the mid-nineteenth century, as well as the philosophical question it raised: What is the proper role of government? This book reflects upon both the shifting political consciousness of the late sixteenth century and the legitimation rituals that were invoked to place change in a traditional context. It also reflects upon the architect of that change—a troubled parvenu who acted often with moderation and sometimes with explosive brutality.