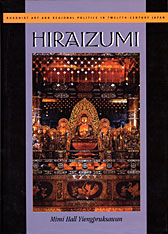 In the twelfth century, along the borders of the Japanese state in northern Honshu, three generations of local rulers built a capital city at Hiraizumi that became a major military and commercial center. Known as the Hiraizumi Fujiwara, these rulers created a city filled with art, in an attempt to use the power of art and architecture to claim a religious and political mandate. In the first book-length study of Hiraizumi in English, the author studies the rise of the Hiraizumi Fujiwara and analyzes their remarkable construction program. She traces the strategies by which the Hiraizumi Fujiwara attempted to legitimate their rule and grounds the splendor of Hiraizumi in the desires, political and personal, of the men and women who sponsored and displayed that art.