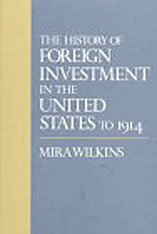 The History of Foreign Investment in the United States to 1914

Wilkins reviews foreign portfolio investments in government securities (federal, state, and local) and in corporate stocks and bonds, as well as foreign direct investments in land and real estate, manufacturing plants, and even such service-sector activities as accounting, insurance, banking, and mortgage lending. She finds that between 1776 and 1875, public-sector securities (principally federal and state securities) drew in the most long-term foreign investment, whereas from 1875 to 1914 the private sector was the main attraction. The construction of the American railroad system called on vast portfolio investments from abroad; there was also sizable direct investment in mining, cattle ranching, the oil industry, the chemical industry, flour production, and breweries, as well as the production of rayon, thread, and even submarines. In addition, there were foreign stakes in making automobile and electrical and nonelectrical machinery. America became the leading industrial country of the world at the very time when it was a debtor nation in world accounts.