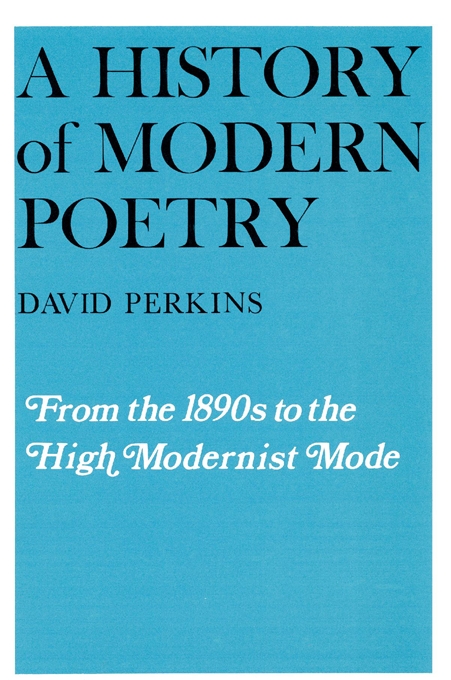 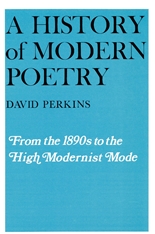 A History of Modern Poetry, Volume I: From the 1890s to the High Modernist Mode

A History of Modern Poetry

The first comprehensive history of modern poetry in English from the 1890s to the 1920s, this book embraces an era of enormous creative variety—the formative period during which the Romantic traditions of the past were abandoned or transformed and a major new literature created. By the end of the period covered, Eliot’s The Waste Land, Lawrence’s Birds, Beasts and Flowers, Stevens’s Harmonium, and Pound’s Draft of XVI Cantos had been published, and the first post-Eliot generation of poets was beginning to emerge.

More than a hundred poets are treated in this volume, and many more are noticed in passing. David Perkins discusses each poet and type of poetry with keen critical appreciation. He traces opposed and evolving assumptions about poetry, and considers the effects on poetry of its changing audiences, of premises and procedures in literary criticism, of the publishing outlets poets could hope to use, and the interrelations of poetry with developments in the other arts—the novel, painting, film, music—as well as in social, political, and intellectual life. The poetry of the United States and that of the British Isles are seen in interplay rather than separately.

This book is an important contribution to the understanding of modern literature. At the same time, it throws new light on the cultural history of both America and Britain in the twentieth century.