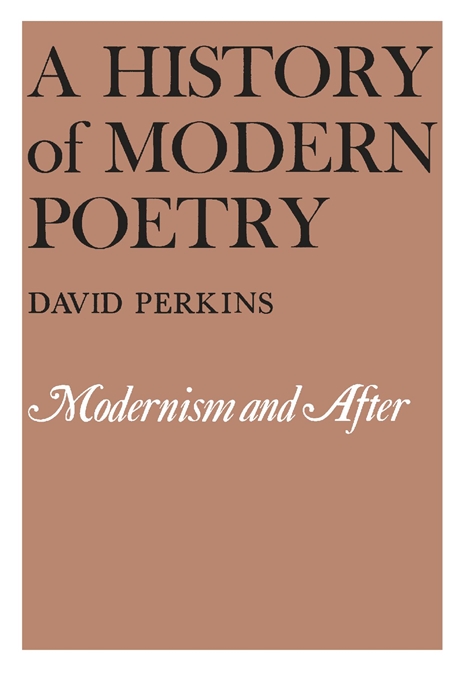 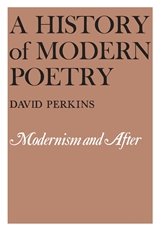 A History of Modern Poetry, Volume II: Modernism and After

A History of Modern Poetry

There have been many books on early modernist poetry, not so many on its various sequels, and still fewer on the currents and cross-currents of poetry since World War II. Until now there has been no single comprehensive history of British and American poetry throughout the half century from the mid-1920s to the recent past. This David Perkins is uniquely equipped to provide; only a critic as well informed as he in the whole range of twentieth-century poetry could offer a lucid, coherent, and structured account of so diverse a body of work.

Perkins devotes major discussions to the later careers of the first Modernist poets, such as Eliot, Pound, Stevens, and Williams, and to their immediate followers in the United States, E. E. Cummings, Archibald MacLeish, and Hart Crane; to W. H. Auden, Dylan Thomas, and the period style of the 1930s; to the emergence of the New Criticism and of a poetry reflecting its tenets in William Empson, John Crowe Ransom, Allen Tate, John Berryman, and Robert Lowell, and to the reaction against this style; to postwar Great Britain from Philip Larkin and the “Movement” in the 1950s to Ted Hughes, Charles Tomlinson, and Geoffrey Hill; to the theory and style of “open form” in Charles Olson and Robert Duncan; to Allen Ginsberg and the Beat poetry of the 1960s; to the poetry of women’s experience in Sylvia Plath and Adrienne Rich; to the work of Black poets from Robert Hayden and Gwendolyn Brooks to Amiri Baraka; and to Elizabeth Bishop, W. S. Merwin, A. R. Ammons, John Ashbery, and James Merrill.

Perkins discusses some 160 poets, mentioning many others more briefly, and does not hesitate to explain, to criticize, to admire, to render judgments. He clarifies the complex interrelations of individuals, groups, and movements and the contexts in which the poets worked: not only the predecessors and contemporaries they responded to but the journals that published them, the expectations of the audience, changing premises about poetry, the writings of critics, developments in other arts, and the momentous events of political and social history. Readers seeking guidance through the maze of postwar poetry will find the second half of the book especially illuminating.