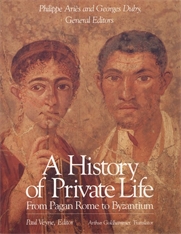 A History of Private Life, Volume I: From Pagan Rome to Byzantium

First of the widely celebrated and sumptuously illustrated series, this book reveals in intimate detail what life was really like in the ancient world. Behind the vast panorama of the pagan Roman empire, the reader discovers the intimate daily lives of citizens and slaves—from concepts of manhood and sexuality to marriage and the family, the roles of women, chastity and contraception, techniques of childbirth, homosexuality, religion, the meaning of virtue, and the separation of private and public spaces.

The emergence of Christianity in the West and the triumph of Christian morality with its emphasis on abstinence, celibacy, and austerity is startlingly contrasted with the profane and undisciplined private life of the Byzantine Empire. Using illuminating motifs, the authors weave a rich, colorful fabric ornamented with the results of new research and the broad interpretations that only masters of the subject can provide.