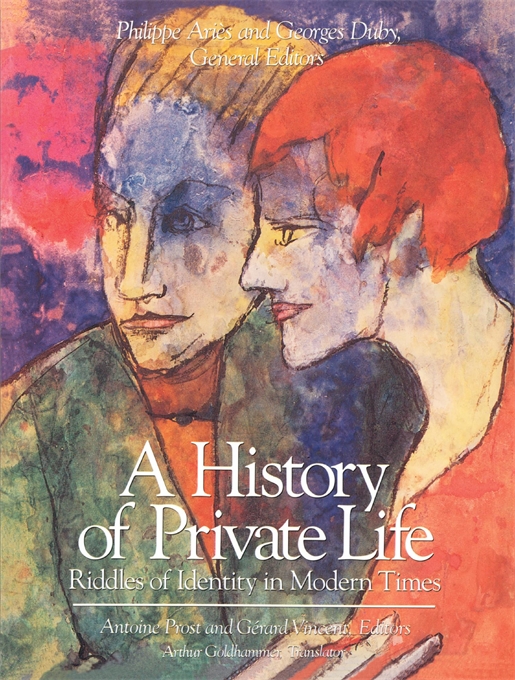 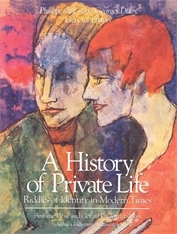 A History of Private Life, Volume V: Riddles of Identity in Modern Times

This fifth and final volume in an award-winning series charts the remarkable inner history of our times from the tumult of World War I to the present day, when personal identity was released from its moorings in gender, family, social class, religion, politics, and nationality. Nine brilliant and bold historians present a dynamic picture of cultures in transition and in the process scrutinize a myriad of subjects—the sacrament of confession, volunteer hotlines, Nazi policies toward the family, the Baby Boom, evolving sexuality, the history of contraception, and ever-changing dress codes. They draw upon many unexpected sources, including divorce hearing transcripts, personal ads, and little-known demographic and consumer data.

Perhaps the most notable pattern to emerge is a polarizing of public and private realms. Productive labor shifts from the home to an impersonal public setting. Salaried or corporate employment replaces many independent, entrepreneurial jobs, and workers of all kinds aggressively pursue their leisure time—coffee and lunch breaks, weekends, vacations. Zoning laws segregate industrial and commercial areas from residential neighborhoods, which are no longer a supportive “theater” of benign surveillance, gossip, and mutual concern, but an assemblage of aloof and anonymous individuals or families. Scattered with personal possessions and appliances, homes grow large by yesterday’s standards and are marked by elaborate spatial subdivisions; privacy is now possible even among one’s own family. Men and women are obsessed with health, fitness, diet, and appearance as the body becomes the focal point of personal identity. Mirrors, once a rarity, are ubiquitous. In the search for sexual and individualistic fulfillment, romantic love becomes the foundation of marriage. Couples marry at an older age; families are smaller. The divorce rate rises, and with it the number of single-parent households. Women, entering the workforce in unprecedented numbers, frequently function as both breadwinner and homemaker. The authors interrelate these dramatic patterns with the changing roles of state and religion in family matters, the socialization of education and elder care, the growth of feminism, the impact of media on private life, and the nature of secrecy.

Comprehensive and astute, Riddles of Identity in Modern Times chronicles a period when the differentiation of life into public and private realms, once a luxury of the wealthy, gradually spread throughout the population. For better or worse, people can now be alone. This fifth volume, differing significantly from the French edition, portrays Italian, German, and American family life in the twentieth century. The authors of these additional chapters—Chiara Saraceno, Ingeborg Weber-Kellermann, and Elaine Tyler May—enlarge and enhance the already broad European and Atlantic canvas that depicts the modern identity.