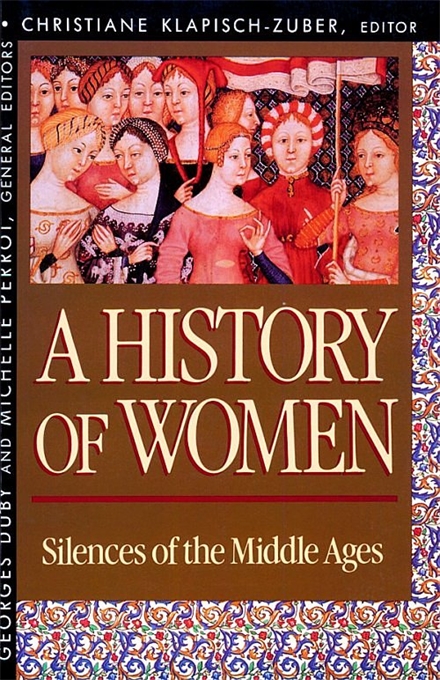 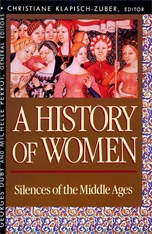 History of Women in the West, Volume II: Silences of the Middle Ages

Drawing on myriad sources—from the faint traces left by the rocking of a cradle at the site of an early medieval home to an antique illustration of Eve’s fall from grace—this second volume in the celebrated series offers new perspectives on women of the past. Twelve distinguished historians from many countries examine the image of women in the masculine mind, their social condition, and their daily experience from the demise of the Roman Empire to the genesis of the Italian Renaissance.

More than in any other era, a medieval woman’s place in society was determined by men; her sexuality was perceived as disruptive and dangerous, her proper realm that of the home and cloister. The authors draw upon the writings of bishops and abbots, moralists and merchants, philosophers and legislators, to illuminate how men controlled women’s lives. Sumptuary laws regulating feminine dress and ornament, pastoral letters admonishing women to keep silent and remain chaste, and learned treatises with their fantastic theories about women’s physiology are fully explored in these pages. As adoration of the Virgin Mary reached full flower by the year 1200, ecclesiastics began to envision motherhood as a holy role; misogyny, however, flourished unrestrained in local proverbs, secular verses, and clerical thought throughout the period.

Were women’s fates sealed by the dictates of church and society? The authors investigate legal, economic, and demographic aspects of family and communal life between the sixth and the fifteenth centuries and bring to light the fleeting moments in which women managed to seize some small measure of autonomy over their lives. The notion that courtly love empowered feudal women is discredited in this volume. The pattern of wear on a hearthstone, fingerprints on a terracotta pot, and artifacts from everyday life such as scissors, thimbles, spindles, and combs are used to reconstruct in superb detail the commonplace tasks that shaped women’s existence inside and outside the home. As in antiquity, male fantasies and fears are evident in art. Yet a growing number of women rendered visions of their own gender in sumptuous tapestries and illuminations. The authors look at the surviving texts of female poets and mystics and document the stirrings of a quiet revolution throughout the West, as a few daring women began to preserve their thoughts in writing.