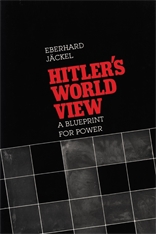 A Blueprint for Power

“[Jäckel’s] critique of the self-contradictions historical research has brought upon itself by abandoning systematic analysis and relying instead on intuitive judgments and the obiter dicta of ex-Nazis such as Hermann Rauschning is cogent and convincing. So also is his analysis of the development of Hitler’s ideas from the ‘conventional foundations’ with which he began in 1920.”—Geoffrey Barraclough, The New York Review of Books

“A highly intelligent and very valuable book by one of the ablest writers on Nazism in Germany. Hitler’s world view—the intellectual system which was the dynamic force of his career—is too often omitted from the history of his movement. Jäckel has reconstructed it with great skill and scholarship. His book fills a serious gap: it shows us the human motor which drove that otherwise inexplicable machine of brutal conquest and extermination.”—H. R. Trevor-Roper