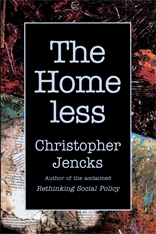 How widespread is homelessness, how did it happen, and what can be done about it? These are the questions explored by Christopher Jencks, America’s foremost analyst of social problems. Jencks examines the standard explanations and finds that the deinstitutionalization of the mentally ill, the invention of crack cocaine, rising joblessness among men, declining marriage rates, cuts in welfare benefits, and the destruction of skid row have all played a role. Changes in the housing market have had less impact than many claim, however, and real federal housing subsidies actually doubled during the 1980s. Not confining his mission to studying the homeless, Jencks proposes several practical approaches to helping the homeless.