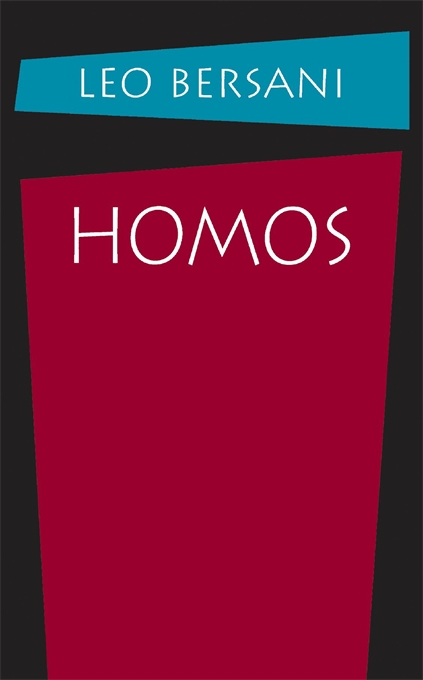 “Perhaps no one since Leo Bersani in "Is the Rectum a Grave?" has written so convincingly against the danger of homosexual assimilation as Leo Bersani in Homos...One of the strongest elements of [this book] is Bersani’s attack on things which promote a `denial of sex,’ whether it be sex acts themselves or, more importantly, the context in which those sex acts are made possible...Homos is a profound piece of imaginative literature.”—Dale Peck, Voice Literary Supplement

“In Homos, Leo Bersani effectively attacks some sacred cows of gay cultural theory. Most obviously, he argues against the tenet that gay and lesbian identities are socially constructed and so ultimately (indeed, preferably) dissolvable...Refreshingly, [Bersani] also does not skate round sensitive questions such as the status of sadomasochism within gay sexual practice, and the tortuousness of the political liaison between gays and lesbians...Bersani emerges as our most persuasive advocate of homosexual identities that offer and require social resistance--he terms this "anticommunitarianism"--but also as perhaps the only writer in the field who convincingly brings together psychological and sociological accounts of sexuality.”—Richard Canning, New Statesman & Society

“In his provocative and sure-to-be-controversial book, Homos, Bersani argues for the need to preserve the ’otherness’ that he maintains is the essential core of homosexual identity.”—David Wiegand, San Francisco Chronicle

“Homos is one of the most interesting books to appear in lesbian and gay literature--in fact its vision is so broad that it places lesbian and gay readers centre stage in what could be a revolution.”—Our Times

“Leo Bersani, one of the most interesting, original and sophisticated of...literary historians, has written primarily on Modernism, from Baudelaire to Beckett and Genet, using Freud’s metapsychology as a way of penetrating into the radical implications of their thought...[His] work...[is] a surprise and a revelation, both careful and highly original...It is deeply exciting to engage with Bersani’s ideas. They allow us to open up traditional psychoanalytic theory, so that it is no longer a mere therapeutic strategy, and consequently a device for social control and homogeneity, but instead a larger perspective for understanding and valuing those possibilities and differences that can constitute human experience.”—Kenneth Lewes, Psychoanalytic Books

“Homos is an extremely persuasive analysis of the "anticommunal" freedom made possible by "perverse" sexuality...Bersani’s argument is at once subtle, even brilliant.”—Peggy Phelan, Contemporary Sociology