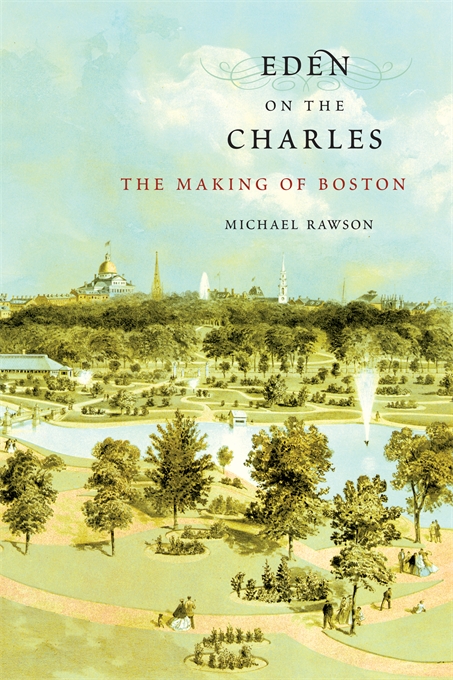 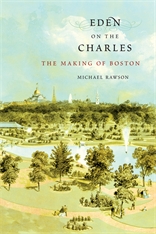 Eden on the Charles

The Making of Boston

“In Eden on the Charles: The Making of Boston, Michael Rawson examines how the city’s relationship with its natural surroundings informed its early growth and development. His compelling, well-researched narrative touches on several milestones on Boston’s road to modernity, including the Common’s conversion from a place of labor to a place of leisure, the emergence of pastoral suburbs as a respite from an increasingly urbanized landscape, and the long fight over a proposed municipal water system to bring fresh water to those who needed it most… Perhaps the book’s most important lesson comes from a frustrated mariner who, upset over the maltreatment of the harbor, laments that ‘the past seems to be forgotten, the present only is regarded as of importance, and a veil is drawn over the future.’ Eden on the Charles is a valiant effort to combat such shortsightedness, reminding us that the key to building a successful community lies in respecting the natural resources that provide for it and in understanding our responsibility to our fellow citizens.”—Michael Patrick Brady, The Boston Globe

“Rawson examines the city of Boston in the 19th century and how its inhabitants constructed not only a city, but also a new way of looking at the connection between people and the natural world that defined what it means to be urban… The author focuses on how Bostonians transformed Boston Common into a public park, created one of the earliest U.S. urban water systems, and helped invent the idea of the pastoral suburb. This urban case study explores the changing nature of environmental relationships and the leading role that the city of Boston played in the process. As such, this readable work makes a valuable contribution to urban historiography.”—T. A. Aiello, Choice

“By tracing the myriad shifting connections between Bostonians and the natural environments that have sustained their lives, Rawson’s Eden on the Charles offers vital new perspectives on the human place in nature and how people think about it—not just for Boston, but for all American cities, past, present, and future.”—William Cronon, author of Nature’s Metropolis: Chicago and the Great West

“In lucid prose and engaging detail, Rawson charts how nineteenth-century Bostonians struggled with nature and one another to craft America’s original city upon a hill. As he concludes, Boston not only shaped our nation’s urban past but also charted its metropolitan future. Anyone who reads Eden on the Charles will see all American cities in a new, powerful light.”—Matthew Klingle, author of Emerald City: An Environmental History of Seattle

“With clear and insightful prose, Rawson effectively intersects ideas of nature and urban growth in a fine treatment of Boston. As he demonstrates so well, it is impossible to examine the history of urban places without understanding how they connect with the world in which they evolve and mature. The book will take a central place among other historical treatments of this magnificent city.”—Martin V. Melosi, University of Houston

“A loving and thorough history of nineteenth-century Boston debates about suburban settlement and the major public works of the era. It is a fine exposition of what seems now to be holding us back from adapting to the needs of the twenty-first century.”—Sam Bass Warner, Jr., author of The Urban Wilderness and Province of Reason