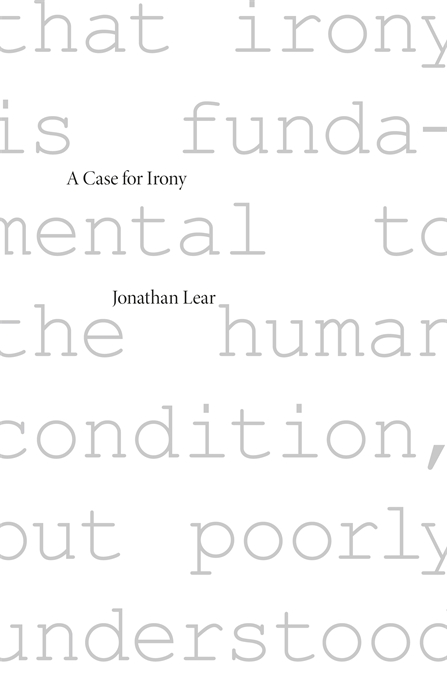 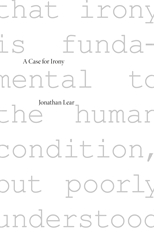 A Case for Irony

“Irony and Humanity,” an online companion to A Case for Irony, presents Jonathan Lear in conversation with Alasdair MacIntyre. Read now »

In 2001, Vanity Fair declared that the Age of Irony was over. Joan Didion has lamented that the United States in the era of Barack Obama has become an “irony-free zone.” Jonathan Lear in his 2006 book Radical Hope looked into America’s heart to ask how might we dispose ourselves if we came to feel our way of life was coming to an end. Here, he mobilizes a squad of philosophers and a psychoanalyst to once again forge a radical way forward, by arguing that no genuinely human life is possible without irony.

Becoming human should not be taken for granted, Lear writes. It is something we accomplish, something we get the hang of, and like Kierkegaard and Plato, Lear claims that irony is one of the essential tools we use to do this. For Lear and the participants in his Socratic dialogue, irony is not about being cool and detached like a player in a Woody Allen film. That, as Johannes Climacus, one of Kierkegaard’s pseudonymous authors, puts it, “is something only assistant professors assume.” Instead, it is a renewed commitment to living seriously, to experiencing every disruption that shakes us out of our habitual ways of tuning out of life, with all its vicissitudes. While many over the centuries have argued differently, Lear claims that our feelings and desires tend toward order, a structure that irony shakes us into seeing. Lear’s exchanges with his interlocutors strengthen his claims, while his experiences as a practicing psychoanalyst bring an emotionally gripping dimension to what is at stake—the psychic costs and benefits of living with irony.