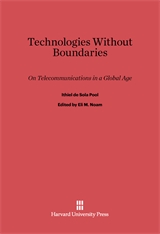 On Telecommunications in a Global Age

At the time of his death in 1984, Ithiel de Sola Pool had completed a rough draft of a manuscript he had been working on for years. It contained his vision of a new world resulting from the social and political consequences of communications technology. Edited into an elegant synthesis of technology, history, politics, and economics by his friend and fellow scholar, Eli Noam, this is the intellectual legacy of one of our century’s wisest social critics.

In the book Pool foresees dramatic changes that will revolutionize culture and society as much as printing did five centuries ago. Because distance no longer places a significant economic burden on communications, he predicts complex changes in the spatial patterns of human settlements. People will not simply move away from cities and disperse, but will cluster together in new ways, for different reasons, and in different locations. The increasingly lower cost of long distance communication will also cause political movements that formerly would have been confined to their country of origin to spill over national boundaries, creating threats to national sovereignty. Furthermore, the ability to customize messages and target them to specific audiences could also work to undermine social and political cohesion. What will it mean to the effective functioning of democratic societies, Pool asks, if the influence of the mass media weakens and citizens can no longer agree on a common agenda of problems, let alone solutions to those problems? Pool also shows how the coming convergence of print and electronic media could lead, inadvertently, to the erosion of the system of free public discourse that we value so highly.

Technologies without Boundaries is a book of great social and political import, accessible—and necessary—to thoughtful readers living in this century and beyond.