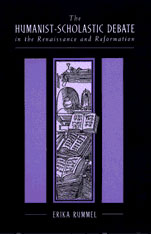 The Humanist-Scholastic Debate in the Renaissance and the Reformation

In the last half of the fifteenth century, the classic Platonic debate over the respective merits of rhetoric and philosophy was replayed in the debate between humanists and scholastics over philology and dialectic. The intense dispute between representatives of the two camps fueled many of the most important intellectual developments of the Renaissance and Reformation. Erika Rummel delves into the extensive primary sources of the times, bringing the issues and their continuing legacy to light and making a valuable contribution to our understanding of the intellectual climate of early modern Europe.

Rummel demonstrates how the passionately fought issue of the period changed focus as humanists such as Lorenzo Valla and Desiderius Erasmus applied philological skills to Scripture. The controversy over form versus content entered a new phase, pitting humanists trained as philologists against scholastic theologians trained as dialecticians. Rummel shows us the framework for the debate still intact as the medium/message dichotomy, and traces its development into quarrels over qualification and entitlement in the academy, as theologians and humanists disputed the intellectual and territorial boundaries of their respective disciplines. Finally, in the first half of the sixteenth century we see the controversy entering the sphere of doctrinal dispute. The question of authority became centered not only on professional competence but also on the more explosive issues of faith and Christian teaching.

This in-depth study will reclaim the attention of those who believe these debates were merely personal and episodic; Rummel’s innovative research provides ample evidence that the polemics of the age arose from a fundamental conflict over methodology and the freedom to pursue research.