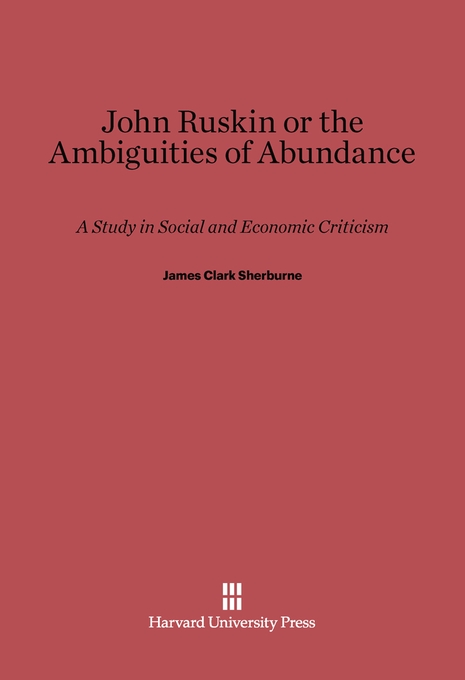 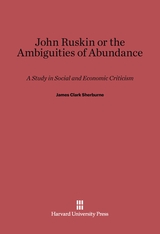 John Ruskin, or the Ambiguities of Abundance

A Study in Social and Economic Criticism

Until 1860 John Ruskin’s writings were primarily about art and architecture; but his belief that good art can flourish only in a society that is sound and healthy led him inevitably to a preoccupation with social and economic problems, the dominant concern of his later writings. James Clark Sherburne provides in this volume a detailed and long overdue re-examination of Ruskin’s social and economic perceptions and, for the first time, systematically places these perceptions in their nineteenth-century intellectual context.

Ruskin’s eloquence and the strength of his moral, aesthetic, and social convictions established him as one of the most influential of Victorian writers. His writings, however, are not easily categorized and many of his important insights occur as digressions in discussions of other topics. Sherburne succeeds in ordering and clarifying the rich chaos of Ruskin’s social thought without denying that wholeness which is, paradoxically, its salient feature. He discovers the source of Ruskin’s social criticism in his early writings. He then follows Ruskin’s interest as it shifts from economic theory to the problems of exploitation, war, imperialism, the means of social reform, and the construction of the welfare state.

Ruskin’s remarkably early vision of the possibility of economic abundance, his anticipation of its social and personal implications, his much disparaged critique of classical economics, his pioneering attention to the role of the consumer and the quality of consumption, his anxious portrayal of the effects of industrialism on the environment, his critique of English educational methods, and his farsighted proposals for public management of industry and transport are among the many aspects of Ruskin’s thought examined by Sherburne. What emerges is an original and exhaustive study of a dimension of Ruskin’s work which, though much neglected, is particularly relevant to contemporary concerns.