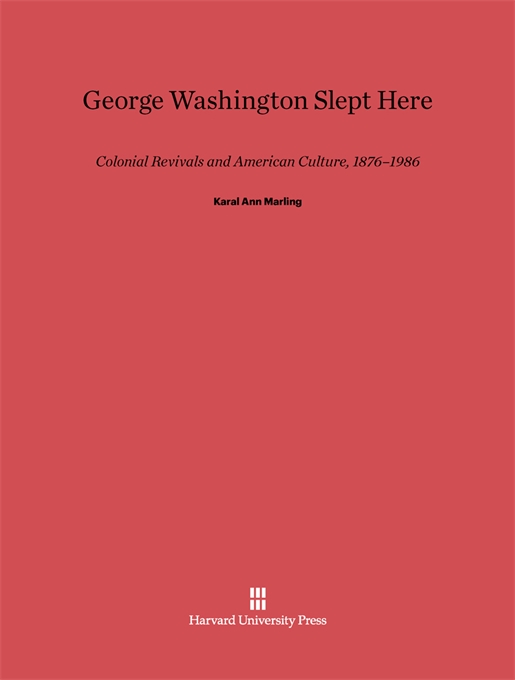 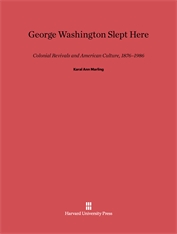 George Washington: Revolutionary general, Father of His Country, first president, authentic hero, prime mover in establishing a constitutional government, squire of Mount Vernon, itself a national shrine. The sheer ubiquity of his persona makes him an excellent focus for understanding how Americans from the centennial of the nation’s birth to the present have rediscovered their colonial origins and have manipulated what they found for a variety of social, economic, and political purposes. The more modern we become, says Karal Ann Marling, the more desperately we cling to our Washingtons, to our old-fashioned heroes, to an imaginary lost paradise chock-full of colonial furniture.

Marling has pursued the figure of Washington from flea markets to World’s Fairs in order to understand his significance in American culture and iconography. Of all American heroes, she points out, Washington is the one most closely tied to artifacts, relics, material possessions, style. She describes the Philadelphia Centennial Exposition of 1876, where the federal government exhibited a scene of camp life at Valley Forge, complete with Washington’s coat, pants, and other personal objects that lent a strong domestic flavor to the nascent colonial revival. When the restoration of Mount Vernon was begun in the late nineteenth century, it was financed and directed by women, as was much of the historic preservation of the period. Thanks to these efforts, the American home became the scene of successive waves of a revivalism that is still very alive in the 1980s.

In describing Washington’s talismanic importance, Marling shows the efforts of twentieth-century politicians to co-opt his incorruptible image. When Harding wanted to convince Americans of his reliability and probity, he campaigned from the Colonial Revival porch of his house on Mount Vernon Avenue in Marion, Ohio. The Washington image was mined for the campaigns that celebrated Calvin Coolidge’s Puritan simplicity and Herbert Hoover’s engineering talents, said to be related to George Washington’s career as a surveyor; more recently, Ronald Reagan at his second inaugural invoked the vision of the humble general praying in the snow at Valley Forge. The neutral and flexible Washington became whatever people wanted him to be—the decorators’ darling, the doyen of the D.A.R., the model citizen held up as an example to unruly children and immigrants.

But Marling’s book is about more than George Washington and the different ways in which Americans have made use of their past. In her quest for the unhistorical George, Marling has examined the subculture of American life—magazine fiction, historical romances, movies (both silent and talking), and journalism. She traces the descent of high art into such popular forms as posters, plaques, packages, and billboards, all to illuminate how Washington’s iconic meaning has influenced styles and tastes on many levels.