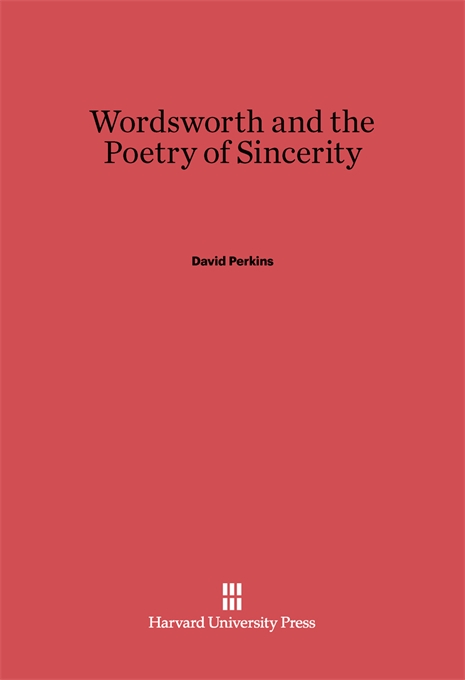 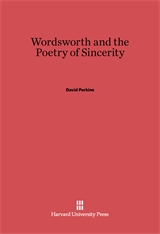 Wordsworth and the Poetry of Sincerity

This book presents not just the Romantic Wordsworth, but Wordsworth as part of a large historical movement in poetry, beginning in the eighteenth century and continuing to the present day. It concentrates on the difficult, much discussed, but little analyzed problem of “sincerity” in poetry, which it treats both critically and historically, as a demand relatively new in Wordsworth’s time and still with us. It contains an extended criticism of Wordsworth’s later poems, and explores the vexing question of why the mode of his poetry changed as he grew older.

The author shows that the ideal of sincerity has influenced poets, critics, and common readers from Wordsworth to now, and describes the problems raised for poets by this new challenge. The first problem is the adequacy of language—does the very structure and fact of language stand as an obstacle to a complete sincerity? Perkins says: “One can hardly explain the history of poetic style or, indeed, of literature since Wordsworth, unless one keeps in mind that there has been a continuing mistrust of language. By words, it is feared, we chop realities into categories. The categories are arbitrary, or, even if they are not, their generality strips our experience of its unique aspects.”

Another problem raised by the challenge of sincerity is the distrust of poetic form. How can you write with a personal sincerity when you have to use meters and stanzas? Or, more fundamentally, how can you be honest to the complexity and uncertainty of your own experience, when a poem must always be more limited than the consciousness from which it arises? Still another problem is the distrust of poetic conventions and traditions. The author says, “The wish to be sincere is challenged and baffled by the fact that poetry is a learned performance, that all poetic expression depends on traditions and conventions peculiar to the art and inherited from the past...Yet if you imitate the great achievements of the past, how can your poem be thought a sincere personal utterance? The question of imitation is only the most obvious result of this anxiety. For a fanatic sincerity may suppose that merely to be influenced by other writers—in fact, to be influenced by anything at all—somehow clouds the purity of self-expression.”