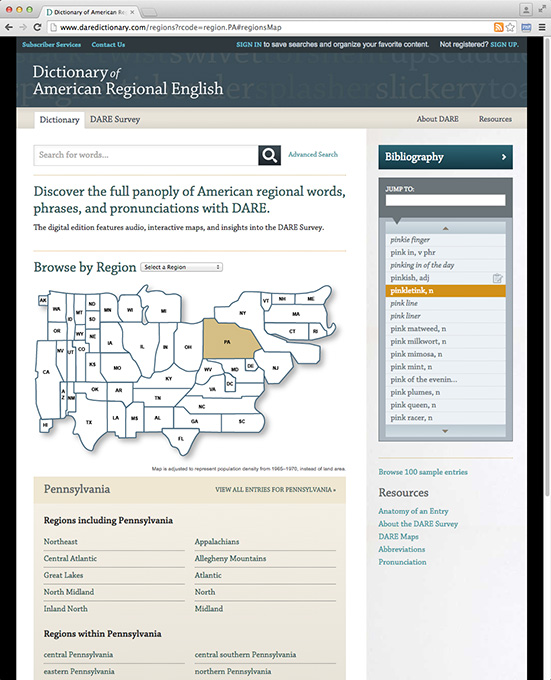 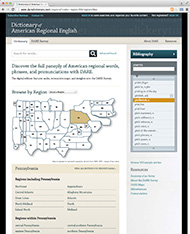 “Putting the dictionary online has given easy access to the entire range of questions [from the language survey], and the pleasure of reading them is hard to overstate.”—Jesse Sheidlower, The New Yorker

“What a difference DARE has made in our knowledge of the way Americans talk—and used to talk—in all 50 states!”—Allan Metcalf, The Chronicle of Higher Education

“An epic compendium that’s been in the works since 1965. Now, it’s done and all 60,000 words are available on a great interactive site.”—Sadie Stein, Paris Review blog

“Exploring DARE is a true delight. It’s full of surprises for English speakers and using the Advance Search feature can take users down an endless path of word discovery.”—Jane Solomon, Dictionary.com blog

“The digital DARE contains all the material from the print edition and is an amazing database… For those who fear they may miss the serendipity of browsing through the print pages, the ‘Word Wheel’ feature on the right side of the home page encourages scrolling through a list of entries… A standout feature is that some entries have brief audio clips featuring the original people who were interviewed… The detailed work that made the print DARE a major resource is mirrored in the digital version. Ideally, all academic and large public libraries should subscribe to this fantastic resource.”—Christine Bulson, Booklist

“Since 1965, linguists, lexicographers, and wordsmiths have been waiting for the editors of the Dictionary of American Regional English (DARE), charting under-the-radar regional language nationwide, to reach the end of the alphabet. They gifted us with the fifth and final volume last year, and now the whole thing is available online. There is a delightful muchness in it. The standard dictionary necessarily focuses on what we all say, but it should not disqualify a word as English if only some of us say it. DARE is a much different English than we are used to seeing gathered in one place. From 1965 to 1970, the editor and his staff covered 1,002 communities nationwide, asking 2,777 people what they called 1,847 various items. The finished DARE contains 60,000 words and 2,985 maps. Tabulating all of the data was so gargantuan a task that the original editor didn’t even live to see the project completed. It was worth the wait.”—John McWhorter, The New Republic

“The Dictionary of American Regional English, which for the last 30 years has been the authoritative source on American colloquialisms and local slang, is now online. As a result, you don’t need to consult the five-volume print edition to drop some fresh folk sayings at parties… The website features a map that lets you browse entries by state (Massachusetts’ page features ‘two-toilet Irish,’ ‘pinkletink’—a young frog on Martha’s Vineyard and Nantucket—and ‘joe flogger’) and original audio recordings, thick with twang and drawl, made during the initial round of data collection in the late 1960s.”—Kevin Hartnett, The Boston Globe

“Looking at the maps at daredictionary.com reveals the linguistic fault lines in Illinois… When I was growing up, chalking in hopscotch games on city sidewalks, every kid called the area at the top ‘sky blue.’ Turns out that is a phrase used chiefly in Chicago.”—Lynn Sweet, The Chicago Sun-Times

“Harvard’s publication of digital DARE represents a 50-year effort that began at the University of Wisconsin in Madison under the legendary lexicographer Frederic Cassidy. Since 2000, the project has been under the direction of Emory University Ph.D. Joan Houston Hall. The Cassidy/Hall achievement has been celebrated on national radio, TV and in feature stories in the New York Times, Wall Street Journal, Time Magazine, Smithsonian Magazine and scores of other publications. The range of frequent DARE users includes an eclectic mix of teachers, students, and librarians as well as forensic linguists, law enforcement officers, physicians and Hollywood dialect coaches.”—Robert Moore, The Raleigh Telegram

About HUP eBooks About Exam Copies