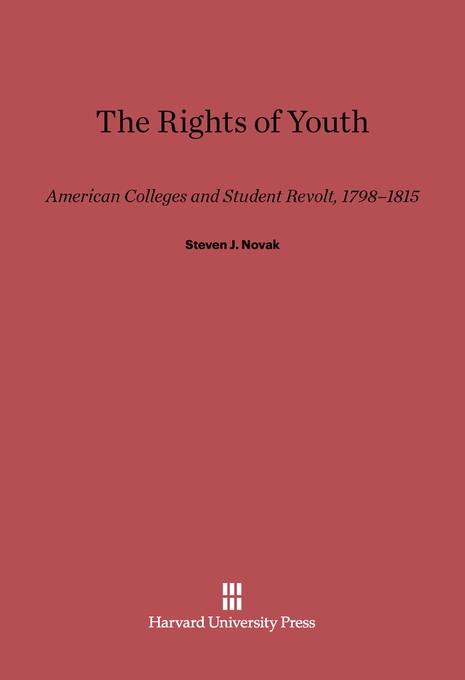 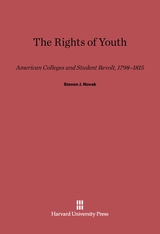 The Rights of Youth

The first major student revolt in American colleges came at the turn of the nineteenth century in unprecedented riots and rebellions. Though on a small scale in contrast to the campus turmoil of the 1960s and 1970s, in many ways it was equally significant. Yet its history has never been written. In this book, Steven Novak presents a history of rebellious Sons of the Founders as a lost generation. Born too late for the Revolution and too early for the Civil War, the scions of great families in America engaged in surrogate political activity.

Why did upper-class, Federalist, and socially conservative students become rioters? Novak argues that they were politicized by their Federalist fathers and wanted to outdo their elders in nationalistic and chauvinistic acts. The Sons of the Founders were also a displaced elite and their rioting was a manifestation of their frustration in life. At the time, however, resistance was attributed to Jacobinism and freethinking, and colleges adopted a new disciplinary tool—the blacklist—that effectively suppressed the rioting. Rebellions continued, but more as an adolescent rite than as a practical means of achieving power.

In addition to important findings on the causes of rioting, Novak offers acute observations about the part rebellion played in defining the old-time college. In the 1780s and 1790s American educators were devising a republican education adapted to the principles and needs of the new nation. Student revolt was the undoing of experimental and Jeffersonian programs. Professors reemphasized the classics as a counter to radicalism and unrest. Novak also shows that the downfall of republican education coincided with the rise of the evangelical movement in the colleges, leading to a struggle for control of the colleges of national significance.

Although it had antecedents in the seventeenth century, Novak shows that the classical, evangelical, paternalistic old-time college as an American institution was a peculiar product of the backlash against modern philosophy and student revolt at the turn of the nineteenth century.