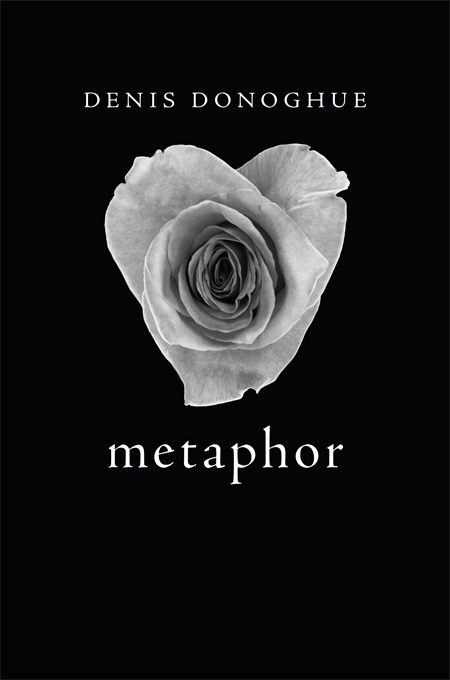 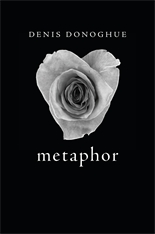 “For almost half a century Denis Donoghue has written stylish, weighty books, distinguished by the way they interweave an intricate sense of literary pleasure with an interest, no less intricate, in philosophical ideas… Now we have Metaphor, a characteristically intelligent and suggestive account, which reconsiders these grand philosophical tensions on the small stage of a figure of speech… Metaphor becomes an index of spiritual freedom: not a bit of tame likeness-making, like a simile. A metaphor is more like a heroic gesture towards autonomy, a rejection of the world of ‘common usage and the values it enforces.’ Donoghue pursues this theme with all his urbane powers of implication and range, finding in the metaphor a miniaturized instance of the idealist imagination… Donoghue is vivid and clever about a whole range of metaphorical uses in these pages.”—Seamus Perry, The Times Literary Supplement

“[A] civilized and informative book… When he discusses Yeats, Joyce or Heaney, Donoghue doesn’t just understand their language but feels it too, and the whole book explains through close analysis of poems by Pound, Stevens and Eliot why image and metaphor have come to occupy such a central position in modernist poetry and 20th-century criticism.”—Colin Burrow, London Review of Books

“[There is a] difference between metaphor that illuminates and metaphor that obscures. It is one of the merits of Denis Donoghue’s book, with its rich store of examples and its intimacy with the secondary literature, that he is constantly inciting us to wrestle with that distinction.”—Paul Dean, New Criterion

“Compelling… [It] meanders gently from the charmingly personal to the keenly microscopic in its treatment of its (largely literary and philosophical) material… A true readerly pleasure in Metaphor is the intense, tactile connection Donoghue strikes between himself and the text at hand… This is the purpose of Metaphor: to make us see how and why metaphor can revitalize our understanding not just of what we read but of how we read… What [Donoghue] succeeds at doing is to force us to scrutinize with greater care, to convince us to bring a portion of ourselves to what we read, and to get us to think outside the (metaphorical) box to which our everyday associations has confined us. Making metaphor personal is the key to eliciting deeper reading.”—Lianne Habinek, Open Letters Monthly

“You think you know what a metaphor is, but you don’t, not really. Denis Donoghue’s new book, Metaphor, is here to help, tracing the genealogy of the metaphor—along with its siblings, like the simile—throughout history, offering a more complete understanding of this ubiquitous literary device… Chock-full of entertaining examples and informative lessons on all types of metaphor.”—Sewanee Review

“Wonderfully combines the scholarly and the personal. Recalling his metaphor-rich Catholic childhood and hearing ‘Panis Angelicus,’ [Donoghue] unlocks Aquinas’ word-play to elucidate the view that divinity conceals itself in physical symbols. He forces us to reconsider ordinary language, what makes (or doesn’t) make one thing like another and ultimately what truth and reality actually are.”—Jane O’Grady, The Tablet

“[A] subtle and engrossing new book… Full of wild and beautiful examples.”—Michael Wood, The Irish Times

“Let us be clear: this is one of the more important books written by an Irish author so far this century… [Donoghue’s] magnum opus.”—Mark Patrick Hederman, The Furrow

“In this prodigiously learned meditation, Donoghue takes readers through the history of the rhetorical device and its incarnations in poetry, fiction, philosophy, and everyday life… Rummaging through an exhaustive collection of linguistic authorities from Aristotle and Aquinas to Vico, Paul de Man, and J. L. Austin, Donoghue analyzes conflicting accounts of how metaphor shapes language and our experience of reality… Donoghue strives to show how metaphors ‘offer to change the world by changing one’s sense of it.’ Along the way, he studies verse by Shakespeare, Milton, Keats, and Stevens, among many others, weaving a thick tapestry of examples to show how metaphors are used and abused… The book successfully plunges readers into the complexities of figurative language and its power to revivify experience.”—Publishers Weekly

“Donoghue’s gentle, appreciative reflection on literary language here comes with the wisdom of accumulated decades of wide reading and robust insight. This is a book all about imaginative life, and it is a celebration of such life par excellence. It is a treat to watch a far-ranging, first-rate mind range over poetry and prose of centuries with so much zest for more life.”—Leslie Brisman, author of Romantic Origins

“A wide-ranging, deeply learned account of the ‘daring vivacities’ language can achieve from the man who wrote the book on eloquence.”—Denise Gigante, author of Life: Organic Form and Romanticism