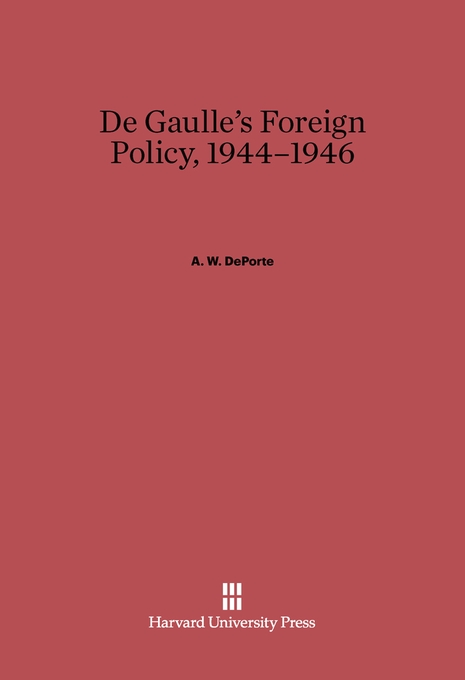 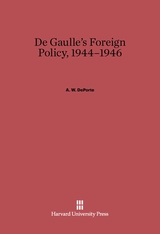 This is the first detailed, scholarly study of French foreign policy during the relatively brief period at the end of World War II when General de Gaulle was President of the provisional French government. During these years de Gaulle took the vitally important step of returning French foreign policy to the pragmatic, nationalist tradition of Poincaré and Louis Barthou. De Gaulle’s efforts on the international scene, although not strikingly successful in themselves, foreshadowed many of the aims and policies which were pursued in various ways by his successors in the Fourth Republic and which he himself has reaffirmed in the years since 1958.

In the opening chapter, A. W. DePorte outlines French foreign policy between 1918 and 1940 and at the same time places de Gaulle firmly within that tradition of French diplomacy which rejected the notion that France could afford to be dependent on either Germany or Great Britain. In the second chapter, the author reviews de Gaulle’s wartime experience, emphasizing his preoccupation with restoring France to full status as a Great Power and pointing out the extent to which his distrust of alliances preceded the problems he encountered with his allies as leader of the Free French. This discussion also includes a perceptive reevaluation of de Gaulle’s difficulties with President Roosevelt.

The remaining chapters of the book deal in detail with the working out of diplomatic policies and problems during de Gaulle’s term in office. Domestic affairs are discussed when events at home had a bearing on policy abroad. Through the issues and attitudes of these years—the Franco–Soviet pact, the distrust of allies and their blocs, the attempts to organize other groupings around France, the proposals for a Western European entity in which at least part of Germany could find a place—runs the unifying theme of the constant thrust for recognition of France’s standing as a major power. During this period de Gaulle suffered many setbacks, but it is noteworthy that his basic objective the acceptance of France’s right to participate in the great decisions of peace and war—which he himself did not achieve, was attained by his successors.