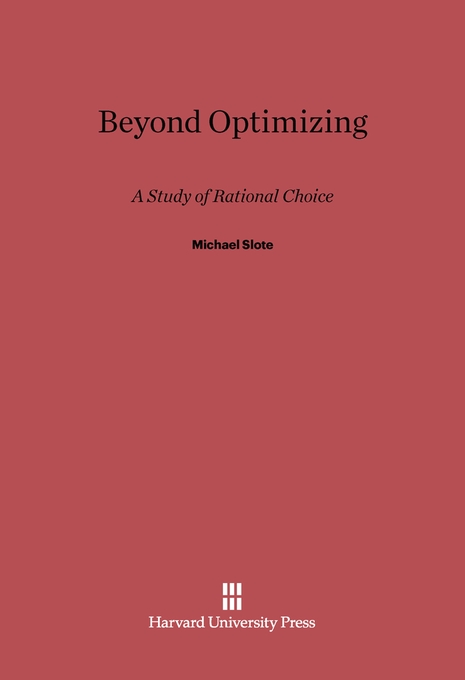 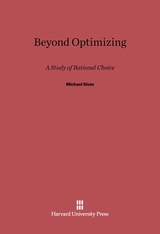 A Study of Rational Choice

Philosophy, economics, and decision theory have long been dominated by the idea that rational choice consists of seeking or achieving one’s own greatest good. Beyond Optimizing argues that our ordinary understanding of practical reason is more complex than this, and also that optimizing/maximizing views are inadequately supported by the considerations typically offered in their favor.

Michael Slote challenges the long-dominant conception of individual rationality, which has to a large extent shaped the very way we think about the essential problems and nature of rationality, morality, and the relations between them. He contests the accepted view by appealing to a set of real-life examples, claiming that our intuitive reaction to these examples illustrates a significant and prevalent, if not always dominant, way of thinking. Slote argues that common sense recognizes that one can reach a point where “enough is enough,” be satisfied with what one has, and, hence, rationally decline an optimizing alternative. He suggests that, in the light of common sense, optimizing behavior is often irrational. Thus, Slote is not merely describing an alternative mode of rationality; he is offering a rival theory. And the numerous parallels he points out between this common-sense theory of rationality and common-sense morality are then shown to have important implications for the long-standing disagreement between commonsense morality and utilitarian consequentialism.

Beyond Optimizing is notable for its use of a much richer vocabulary of criticism than optimizing/maximizing models ever call upon. And it further argues that recent empirical investigations of the development of altruism and moral motivation need to be followed up by psychological studies of how moderation, and individual rationality more generally, take shape within developing individuals.