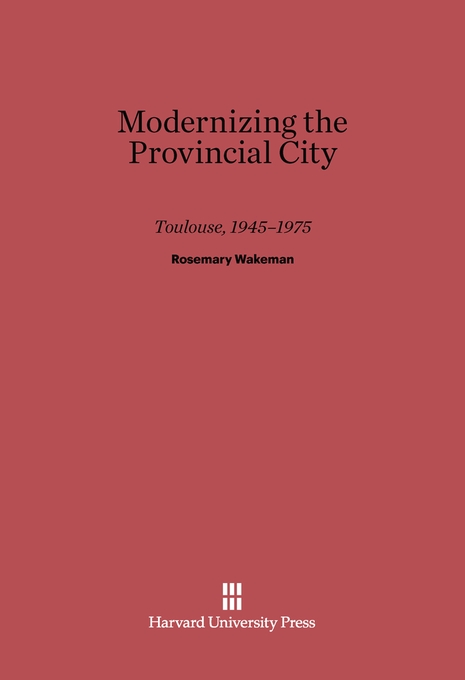 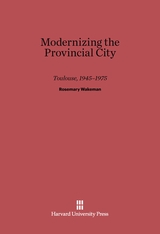 “[Wakeman’s] wide-ranging perceptions and energetic research generate a comprehensive history of postwar Toulouse that conforms to the older tradition of the urban biography… Cities like Toulouse have wrought much good, and Wakeman has done well to show us the roots, and the results, of this protean change.”—Anthony Sutcliffe, American Historical Review

“Rosemary Wakeman’s Modernizing the Provincial City examines the astonishing transformation of a ‘shabby regional outpost’ into a showcase city of French modernity during the trente glorieuses… Wakeman’s impressive achievement is to show how messy, conflictual, and incomplete the city’s transformation was. She portrays Toulouse in the 1950s and 1960s as a battleground… Wakeman keeps her focus squarely on the periphery. This approach has the advantage of revealing how variegated people’s responses were to the transformation of the city and the regional economy.”—French Historical Studies

“The city of Toulouse offers one of the most striking examples of a French city’s transformation from regional center to national crossroads. Wakeman undertakes the analysis of Toulouse’s modernization on political, economic, industrial, and cultural levels, providing an extensive description of the turbulent and controversial changes that took place following World War II.”—Susan S. Hennessy, French Review

“This superb study of the twentieth-century French providence of Toulouse will hopefully inspire study of others, such as Lyon or Bordeaux. Wakeman provides a most perceptive analysis of modernization and urbanization during the ‘thirty glorious years’ of France’s post–World War II expansion… Wakeman provides an excellent analysis of the changing class composition of the city and expertly integrates this into the larger changes in post-1945 French urban society.”—W. Scott Haine, H-France

“A thoughtful study and quite worthy of general attention.”—H. J. Kaplan, National Interest

“The book makes an original contribution to the field of French urban history. The choice of Toulouse as a site to study the postwar transformation of urban France was truly inspired: no city captures quite so well the contrast—and clash—between old and new, Paris and the provinces, the communitarian and the technocratic approaches to making choices. Because Wakeman has done such a good job situating her story about Toulouse in its larger national context, the book can be read not just as a major monograph in urban history, but also as a significant contribution to a fast-emerging literature on postwar France itself. As in all good case studies, this one tells a large and important tale through the framework of a carefully delimited setting… I think the book will find a diverse readership, both within and beyond the field of French history.”—Herrick Chapman, New York University, author of State Capitalism and Working-Class Radicalism in the French Aircraft Industry

“A great book. In an exceptionally engaging fashion—Wakeman writes extremely well—Wakeman tells not only the history of the transformation of Toulouse during the trentes glorieuses following the war, but more importantly, the history of how technocratic state planning agencies set out to transform dilapidated, backward Toulouse into a modern urban center. Wakeman recounts in sufficient—but not excessive—detail how the interplay between political and social forces in Toulouse and ministries in Paris led to the construction of a new urban image of Toulouse as a dynamic center of research and industry. She does a wonderful job examining the transformation of urban space, housing, business, and politics, using each to reflect upon the particular nature of modernization in provincial France. Wakeman is also alert to the ways in which elements of ‘old Toulouse’ were appropriated for a certain quaintness and semblance of grounded particularity which can be as integral to the French style of modernization as skyscrapers, research facilities, and highways… I don’t think any book tells this story more perceptively than Wakeman’s. Modernizing the Provincial City also differs from other accounts in that it is neither elegiac nor celebratory… Wakeman’s understanding of modernization as involving the cultural construction of an image as much as the articulation of any particular credo, technique, economic model or aesthetic suggests that her work could play an important role in theoretical debates over the nature of modernization.”—Donald M. Reid, University of North Carolina