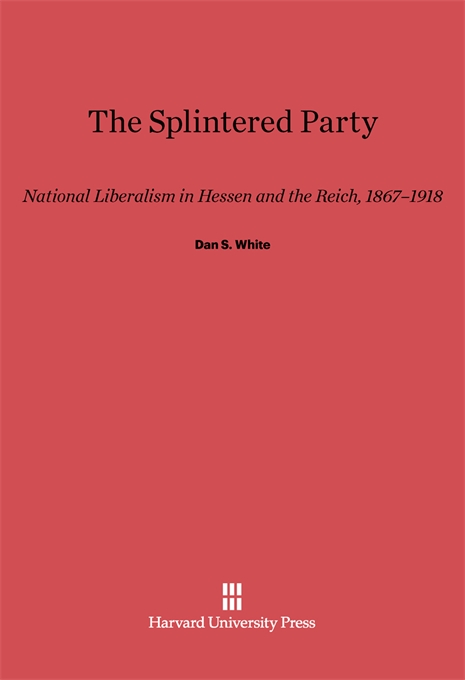 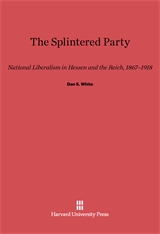 As a study of the greatest middle class party of Imperial Germany, The Splintered Party is inevitably, in its broadest aspect, an inquiry into the weaknesses of liberalism in the Empire of Bismarck and Wilhelm II. How did the National Liberals, the dominant force in the Reichstag of the 1870s, become by 1914 a spent and divided power? Dan White explores this question from a new perspective, emphasizing regional circumstances as primary agents of the party’s decline. The resulting portrait underscores the paradox of the National Liberals: a party with strength in all areas of the Empire, a rarity before 1914, yet a party whose impact was undermined by divisions among its regional branches.

In The Splintered Party the former Grand Duchy of Hessen serves as a testing ground where the regional foundations of National Liberalism can be exposed. As Professor White points out, the party’s reversals on the Imperial plane after 1878—rejection by Bismarck, electoral defeats, internal splits—not only ended its early primacy in German affairs but also shifted political initiative from Berlin and the Reichstag delegation to the National Liberal branches in the states and provinces, which had maintained unity, power, and alliances with local government in spite of the upheaval above them. The consequences of this change become visible through close examination of the political and social structure in Hessen. On the regional level a liberalism based on the claim to majority representation by the notables (Honoratioren) of bourgeois society, a creed no longer plausible in national politics, remained defensible. Through the Heidelberg Declaration of 1884 the National Liberals of the German Southwest attempted to buttress this approach with an economic and social platform and, simultaneously, to make it the impulse of the national party’s revival. But they succeeded only in deferring National Liberalism’s adjustment to democratic politics and in subordinating their movement to the clash of regional and constituency interests. The result was a chronically splintered party.

Against the backdrop of this main theme, White delineates several additional features of the changing political and social scene in Imperial Germany—the local power of the notables, Bismarck’s skills as a political manager, the character of agrarian discontent and rural anti-Semitism, the steady advance of socialism. The uniquely German element in National Liberalism’s failure is assessed in a concluding comparison with the development of liberal politics in Britain and Italy.