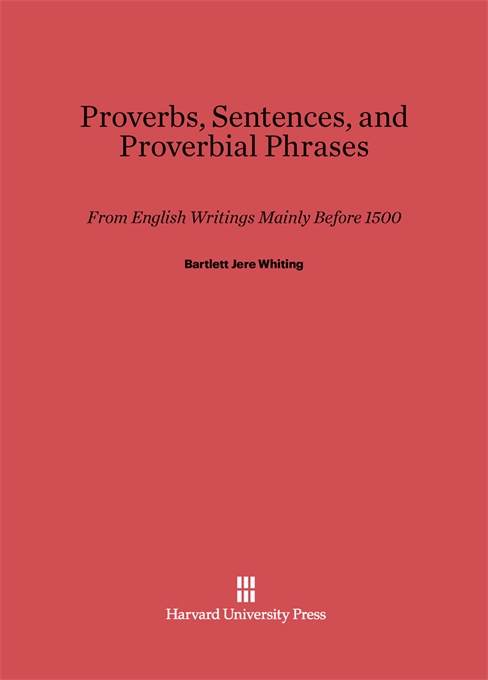 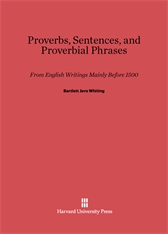 Proverbs, Sentences, and Proverbial Phrases from English Writings Mainly before 1500

This book is a collection of English proverbs, sentences, and proverbial phrases from the Middle Ages. The material is drawn from an exhaustive examination of the surviving texts, mainly printed ones but some still in manuscript. Certain books written later than 1500, usually by authors who were born twenty years or so before the turn of the century, are included, and John Heywood, the first great assembler of English proverbs, is represented by the sayings he compiled.

“No matter how popular a saying may appear,” Bartlett Jere Whiting points out in his Preface, “it comes to us at one remove or more from popular usage. The medieval proverbs which survive do so only because they were written down by educated men, none of them collectors from the field. In most cases the sayings were incorporated in literary works by authors who did not hesitate to make changes suggested by context, application, and meter. We sometimes forget that Heywood’s Dialogue and Epigrams are poems, although Heywood’s standards of prosody are such as to let him use proverbs without too drastic changes for rhyme and rhythm’s sake. What we have in most quotations is the proverb, not as an author may have heard or read it, but in the form which suited his immediate convenience or whim.”

The sayings are alphabetized by key words and the quotations are in chronological order. Cross-references link sayings of similar import, and the index is a guide to important words other than those by which the alphabetical order is established. References are given to the standard collections of English proverbs, so that the user can trace the later history of many of the sayings.

Filling a long-felt gap in the field, this work will be indispensable to students of Old and Middle English literature and of great value to everyone interested in the rich resources of proverb lore.