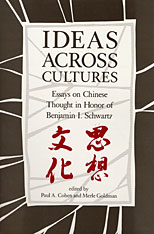 Essays on Chinese Thought in Honor of Benjamin I. Schwartz

Edited by Paul A. Cohen

Benjamin Schwartz taught at Harvard from 1950 until his retirement in 1987. Through his teaching and writing, he became a major force in the field of Chinese studies, setting standards—above all in the area of intellectual history—that have been a source of inspiration to students and scholars worldwide. His influence extends well beyond the China field, cutting across conventional disciplinary boundaries, touching political science, religion, philosophy, and literature as well as history.

The essays in this book are by scholars who have studied with Benjamin Schwartz. Given the range of his own interests, it is fitting that they embrace an expanse of time from the Zhou dynasty to the present and a range of subjects equally inclusive—ancient and medieval Chinese thought, the fate of democracy in early Republican China, the development of aesthetic modernism in the 1920s and 1930s and its reemergence in the post-Mao era, the emphasis on spiritual regeneration and cultural transformation in Chinese and Japanese Marxism, popular values in twentieth-century China (as reflected in village theatrical performances), the larger issue of what part our own values should take in the study and assessment of other societies and cultures, and the equally broad issue of how we are to address the relationship between Chinese modernization and China’s traditional culture.

Despite this heterogeneity and the fact that the contributors include two political scientists, five historians with strong philosophical interests, and three scholars whose writing bridges the disciplines of history and literature, there is a surprising coherence to the volume. Almost all the authors consciously address either aspects of Schwartz’s general approach or specific themes dealt with in his work. Each contribution is about ideas and takes ideas and their societal roles seriously. Although presented in the specific context of China, the issues raised in these essays are important to the world beyond China. Exploring them in both their Chinese and non-Chinese settings reflects the power of Schwartz’s own work in illuminating a broader canvas of human thought.