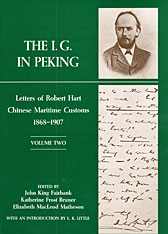 Robert Hart’s forty-five-year administration of China’s customs service was a unique achievement. In these letters Hart speaks to us directly from a time long past in China, but a time that may seem only yesterday to a Western reader. The result is a primary source for the history of modern China and the era of foreign privilege there.

Bearing sole responsibility for the Chinese Maritime Customs as its Inspector General, Hart built up an international staff of thousands, facilitated foreign trade, gave the late-Ch’ing court its principal new revenues, and fostered China’s modernity in administration, schools, naval development, postal service, and many other lines. Behind the scenes Hart was also a diplomat who settled the Sino–French war, changed Macao’s status, got boundaries delimited with Burma and India, and mitigated the disasters of imperialism. His career at Peking, coinciding with that of the Empress Dowager Tz’u-hsi, represented the constructive side of the unequal treaty system and Victorian Britain’s informal empire in East Asia.

The publication of the great I. G.’s weekly or fortnightly letters to his confidant and London commissioner, James Duncan Campbell, gives us an intimate, inside view of Hart’s problems and methods. He appraises his employers in China’s foreign office, the Tsungli Yamen, and comments pithily on the complex flow of events and personalities. He quotes the Confucian Classic but, even more, the Latin poets. His personal life is revealed—standing long hours at his writing desk, finding solace in the violin, keeping his own counsel, constantly isolated by his responsibilities. Having no confidant in Peking, he explains himself to his loyal agent in London.

The Hart–Campbell letters, after five years’ editing and annotation and with an informed introduction by Hart’s final successor as foreign I. G., L. K. Little, thus take their place as one of the great historical treasures that bring a vanished era back to life.